ACC 2021: Findings From the RESCUE Trial

In this video, Dr Paul Ridker (Brigham and Women’s Hospital, Boston, MA, US) discusses the findings from the RESCUE trial, which aimed to assess whether Ziltivekimab is effective in reducing cardiovascular biomarkers in high-risk patients with chronic kidney disease. Dr Ridker also outlines the upcoming ZEUS outcomes study following the results of this trial.

My name is Paul Ridker. I'm a cardiologist at Boston's Brigham and Women's Hospital where I direct the center for cardiovascular disease prevention. And I have the honor of serving as a Eugene Braunwald Professor of Medicine at the Harvard Medical School also in Boston, Massachusetts.

What does this trial aim to address?

So the RESCUE trial was designed to see whether or not a novel Interleukin-6 monoclonal antibody called ziltivekimab could be effective in potentially lowering cardiovascular biomarkers in very high risk patients with chronic kidney disease. You might ask, why are we doing that? Well, we've learned that inflammation is crucial to atherosclerosis, and our 2017, 10,000 patient CANTOS trial with an interleukin-1 beta inhibitor proved that reducing inflammation can be just as effective as reducing cholesterol and preventing cardiovascular events, but that drug as many of your readers are aware also had large effects on cancer and is now being developed as a drug for oncology. So we're looking for novel anti-inflammatory drugs that we think can have similar benefits and the interleukin-6 pathway for reasons that are both genetic, clinical and experimental seems to be a central target for atherosclerosis. So RESCUE was a 264 patient Phase 2, 24-week trial of multiple different doses of ziltivekimab primarily to see whether it will lower CRP, C-reactive protein, the biomarker of inflammation, and also to see what it might do for other biomarkers and for safety. And the bottom line of that trial was it was very effective, 85 to 90% reductions in CRP, large reductions in fibrinogen serum amyloid A which is another contraxin, large reductions in secretory phospholipase A2, very interesting reductions in lipoprotein little A, and that's biologically relevant, as we all understand, lowering LPA little A is also likely to have relevance for this disease. And then on the safety side, very exciting data that this particular drug had no adverse effects on atherogenic lipids. So the Apo B/Apo A ratio, the total cholesterol, the HDL cholesterol ratio were unchanged with therapy. That's important because several IL6 monoclonal antibodies that are available for other uses such as rheumatoid arthritis have adverse cholesterol effects. And at least in this short term, 24-week trial we saw no real adverse effects on liver function and no real adverse effects on bone marrow function. So there was no grade II or III thrombocytopenia or neutropenia. All of that's very good news. And it basically says this agent, it looks like it might be worth advancing into a major cardiovascular outcomes trial to try and define whether or not we can actually lower cardiovascular event rates.

Can you tell us about the study design, patient population and endpoints?

Sure. So RESCUE was purposely done among patients with very high risk for atherosclerotic disease to find by having chronic kidney disease, moderate to severe grade III or IV chronic kidney disease, and an elevated high sensitivity CRP greater than or equal to 2 milligrams per liter. That's a very high risk group for atherosclerotic events in which the inflammatory process is particularly relevant perhaps even more so than the cholesterol part of the process. There's some very interesting reasons for why inflammation is so important in that setting. And from an anti-inflammatory perspective, it's a population of patients where we probably would not want to give colchicine which is another proven anti-inflammatory drug because colchicine is excreted by the kidney. The primary end points were changed in CRP and change the other biomarkers as I laid out for you. And again, all the results were quite positive and the safety was very good.

What are the key findings?

So the key findings, again, we're 85 to 90% reductions in the inflammatory cascade, that is reductions in CRP itself and concomitant large reductions in fibrinogen serum amyloid A, sPLA2, LP little A, as well as neutral effects on the cholesterol biomarkers and again neutral effects on the safety biomarkers. So if one looks at this in total, one has clear evidence that we have a novel, a potential novel therapeutic that can be advanced into a large scale cardiovascular outcomes trial which we're very excited to be starting very soon.

What conclusions can be made?

Well, the fundamental conclusion from the trial is that the potential for IL6 inhibition as previously proven for interleukin-1 inhibition is substantial. So on the basis of these new data, the sponsor of this particular trial, Novo Nordisk has gone ahead and initiated a large-scale cardiovascular outcomes trial which goes under, it has the name ZEUS the Ziltivekimab cardiovascular outcome study, which will ultimately enroll 6,200 patients across the world who will have the same enrollment criteria known atherosclerotic disease, stage III or IV chronic kidney disease and an elevated CRP, again a very high risk group for cardiovascular events. And there'll be randomized to 15 milligrams of Ziltivekimab given subcutaneously once every month or two placebo, everybody getting very aggressive standard of care including high dose statin therapy. And the primary outcome of that trial will no longer be surrogate biomarkers as it was in RESCUE. It will be hard cardiovascular event rates. So myocardial infarction stroke, cardiovascular death. And it's probably quite interesting to your viewers that the same pathway of innate immune function that goes from the NLRP3 inflammasome to IL1 to IL6 and ultimately producing CRP is also involved in the progression of kidney disease. So a secondary endpoint of the trial is a progression of renal failure itself. So this trial is very interesting focusing on a group of patients with high unmet need and we'll be tracking both the progression of kidney disease as well as progression of atherosclerotic disease. And in fact, my co-chair of the trial, Dr. Vlado Perkovic is a nephrologist. So it makes sense because I'm a cardiologist and the two of us had been working with a sponsor to develop this trial. And I'm very pleased to say that we'll have investigator meeting starting in June and actual enrollment in the trial globally, starting in September. And it's a very exciting time for novel drug development in atherosclerosis.

What are your take-home messages from this study?

I think the take-home message from RESCUE is that cardiologists are learning that inflammation biology is here to stay. CANTOS with an IL1 beta inhibitor, COLCOT and LoDoCo2 with colchicine. We now have three major cardiovascular outcomes trials telling us that what we call residual inflammatory risk is very important. So measuring inflammation in our patients is crucial and matching a therapeutic intervention beyond only focusing on LDL cholesterol, we now know is the future of atherosclerotic disease. RESCUE is a stepping stone on the way to a whole series of novel therapies for this purpose. The RESCUE phase 2 data allow us to launch this new large scale trial called ZEUS which will directly test whether another novel anti-inflammatory in this case, Ziltivekimab and IL6 ligand inhibitor, can also reduce cardiovascular event rates. And ultimately, I would predict 10 years from now, I believe all atherosclerosis patients will be receiving very aggressive cholesterol lowering therapies and very aggressive anti-inflammatory therapies. This new trial ZEUS is a major step in that direction focusing on a very high risk population. But I think down the road, what we're learning is that we have huge opportunities to reduce inflammation to the benefit of our patients, which is going to go beyond what we can currently do by lowering LDL cholesterol. So it's a very, very exciting time from a biologic perspective. And I would predict a very fulfilling time from a clinical perspective. 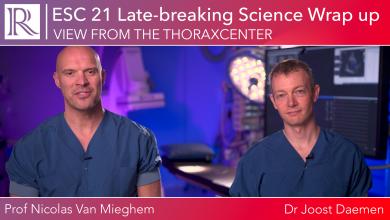 View from the Thoraxcenter: ESC 21 Late-breaking Science Wrap Up 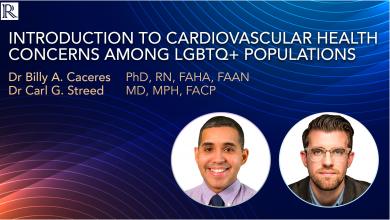 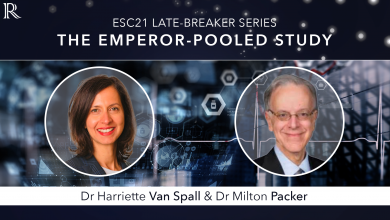 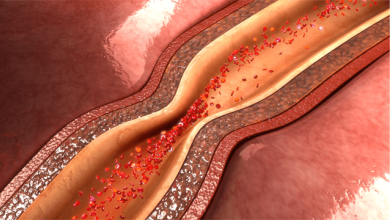