Despite dual antiplatelet therapy (DAPT) including potent P2Y12 inhibitors, recurrent ischaemic events occur in a significant number of patients after acute coronary syndrome (ACS), warranting new antithrombotic strategies. Combinations of non-vitamin K antagonist oral anticoagulant (NOAC) with antiplatelet therapy have been tested in several large phases II and III randomised trials. Overall, current evidence suggests that the use of NOACs on top of DAPT after ACS reduces the rate of recurrent ischaemic events, albeit at the price of increased risk for major bleeding. In the particular field of patients with ACS and atrial fibrillation, NOACs may be associated with reduced bleeding complications compared with vitamin K antagonist. Further randomised trials evaluating low-dose NOAC combined with single antiplatelet therapy are warranted.

Dual antiplatelet therapy (DAPT) including aspirin and a P2Y12 inhibitor is the current gold standard for the treatment and mid-term secondary prevention of acute coronary syndrome (ACS).1–4 However, despite the use of potent P2Y12 inhibitors such as ticagrelor or prasugrel, patients remain at high ischaemic risk after ACS. More specifically, in the prasugrel treatment arm of the TRial to Assess Improvement in Therapeutic Outcomes by Optimizing Platelet InhibitioN with Prasugrel – Thrombolysis In Myocardial Infarction (TRITON-TIMI) 38 trial,5 the rate of the combined endpoint of cardiovascular (CV) death, non-fatal MI or urgent target-vessel revascularisation was 9.9 % within 15 months. In the PLATelet Inhibition and Patient Outcomes (PLATO) trial,6 the rate of the composite of CV death, MI, stroke, severe or not recurrent ischaemia, transient ischaemic attack or other arterial thrombotic events in the ticagrelor arm was 14.6 % within 12 months. Hence, there is clearly room for improvement and reduction of ischaemic events after ACS.

Rationale for Adding an Oral Anticoagulant to Post-ACS Treatment

The underlying mechanism of an acute ischaemic event is mostly intracoronary thrombus formation on the basis of an atherosclerotic plaque, leading to a more-or-less complete obstruction of the coronary vessel and resulting in myocardial cell injury or death.7 The rupture or erosion8–10 of the fibrous cap of an atherosclerotic coronary plaque exposes the highly thrombotic necrotic core to the circulating blood triggering pathways, leading to activation of platelets and the coagulation cascade.11,12 Hence, both antiplatelet agents and anticoagulants are effective and recommended in the acute treatment of ACS until revascularisation is achieved.1–3 However, coagulation may remain activated even after the acute phase, resulting in adverse outcomes.13 Therefore, administration of anticoagulants in addition to antiplatelet agents may be an attractive strategy to further reduce recurrent ischaemic events on a long-term basis.

Early studies investigated the safety and efficacy of an anticoagulant strategy with a vitamin K antagonist (VKA) and aspirin compared with an antiplatelet-only strategy in the setting of secondary prevention after ACS. In a randomised control trial (RCT) including 257 patients after successful coronary stenting, Schömig et al. demonstrated that DAPT (then with ticlopidin and aspirin) was associated with a reduced rate of haemorrhagic and vascular complications within 30 days of successful stenting compared with aspirin and VKA.14 In keeping with these findings, another RCT showed a lower rate of stent thrombosis associated with DAPT compared with aspirin plus warfarin after stent placement.15 More recently, a meta-analysis of 25,307 patients from 14 randomised trials compared VKA plus aspirin with aspirin alone in patients after ST-segment elevation MI (STEMI) or non-ST segment elevation (NSTE)-ACS. Overall, risk of major bleeding was increased with VKA plus aspirin (OR 1.77; 95 % CI [1.47–2.13]; p<0.001) without significant difference in ischaemic events.16 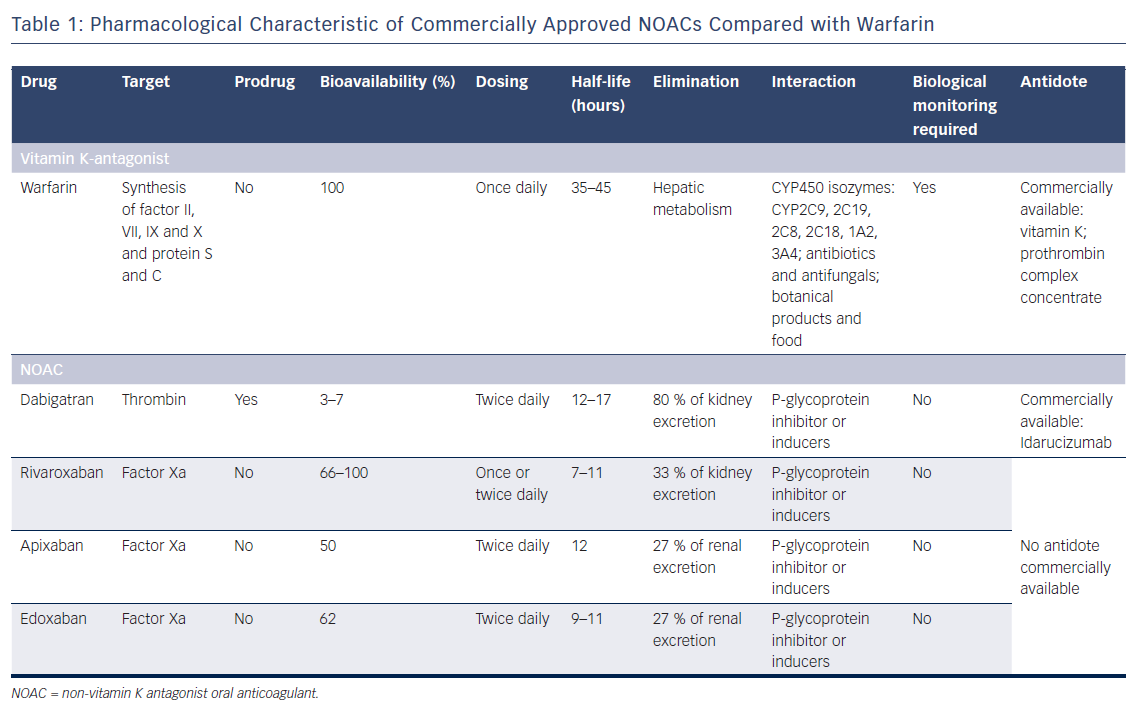 Non-vitamin K oral anticoagulants (NOACs) are direct anticoagulant agents with more favourable pharmacological properties than VKA,17 as detailed in Table 1. One of the main limitation of the use of NOACs may be the limited access to an antidote for effect reversal, compared with VKA. A antibody fragment, idarucizumab, recently received US Food and Drug Administration approval to reverse the anticoagulant effect of dabigatran, a thrombin inhibitor, in cases of life-threatening bleeding or urgent surgical procedure.18 There is currently no commercially available antidote for direct factor-Xa inhibitors, such as apixaban, rivaroxaban or edoxaban.

Andexanet alfa, a recombinant modified human factor Xa decoy, was recently tested in a small phase III study and will require further investigations.19 Notwithstanding this limitation, in randomised trials and real-world registries, NOACs demonstrated an overall safer profile than VKA, with reduced rates of major bleeding and/or intracranial haemorrhage when used to prevent thromboembolic complication of AF.20–24 Recent phase II and III trials have investigated the potential benefits of NOACs in combination with single or dual antiplatelet therapy in patients after ACS (Table 2).

The RandomizEd Dabigatran Etexilate Dose Finding Study in Patients With Acute Coronary Syndromes Post Index Event With Additional Risk Factors for Cardiovascular Complications Also Receiving Aspirin and Clopidogrel: Multi-centre, Prospective, Placebo Controlled, Cohort Dose Escalation Study (RE-DEEM) trial was a phase II trial that investigated dabigatran in the setting of ACS.25 In this study, 1,878 high-risk patients were randomised within 14 days after an ACS to receive either dabigatran (50 mg, 75 mg, 110 mg or 150 mg twice daily) or placebo as well as DAPT with aspirin and clopidogrel. The primary endpoint was the composite of major or clinically relevant minor bleeding at 6 months after randomisation. There was a dose-dependent increase in the rate of the primary outcome, with a hazard ratio (HR) of 1.77 (95 % CI [0.7–4.5]) for 50 mg twice daily; HR 2.17 (95 % CI [0.88–5.31]) for 75 mg twice daily; HR 3.92 (95 % CI [1.72–8.95]) for 110 mg twice daily and HR 4.27 (95 % CI [1.86–9.81]) for 150 mg twice daily. The rates of cardiovascular death, MI and stroke were lower in patients receiving the two higher doses (110 mg and 150 mg) compared with patients receiving the two lower dabigatran doses (50 mg and 75 mg).

Following these results, the APPRAISE-2 phase III randomised, placebo-controlled trial was performed to investigate apixaban 5 mg twice daily in addition to DAPT among high-risk patients enrolled within 7 days of an ACS.27 After recruitment of 7,392 patients out of the 10,800 initially planned, the trial was stopped prematurely because of a significant increase in the rate of thrombolysis in myocardial infarction (TIMI) major bleeding with apixaban compared with placebo (HR 2.59; 95 % CI [1.5–4.46]; p=0.001) without significant differences in the rates of CV death, MI or stroke. 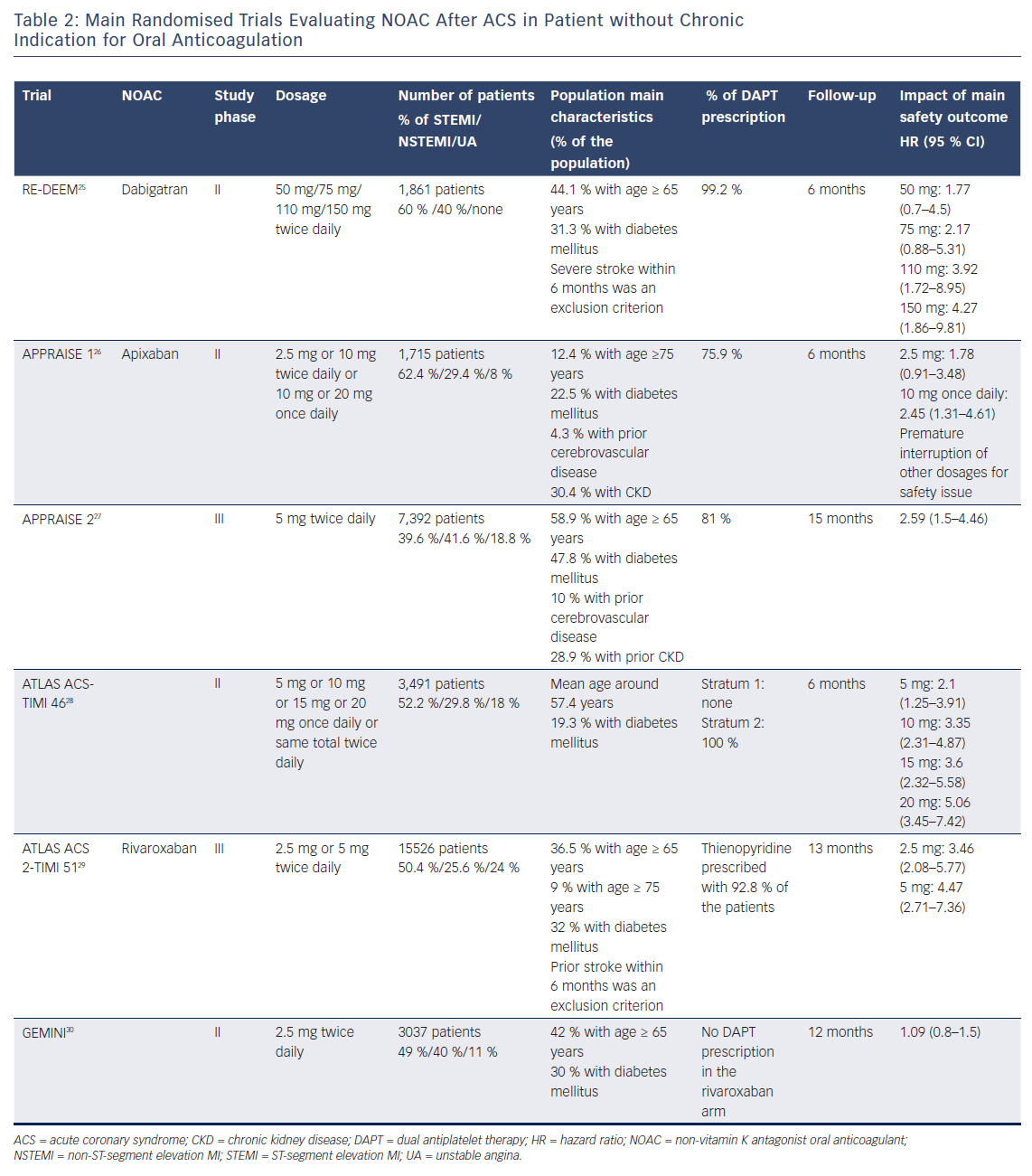 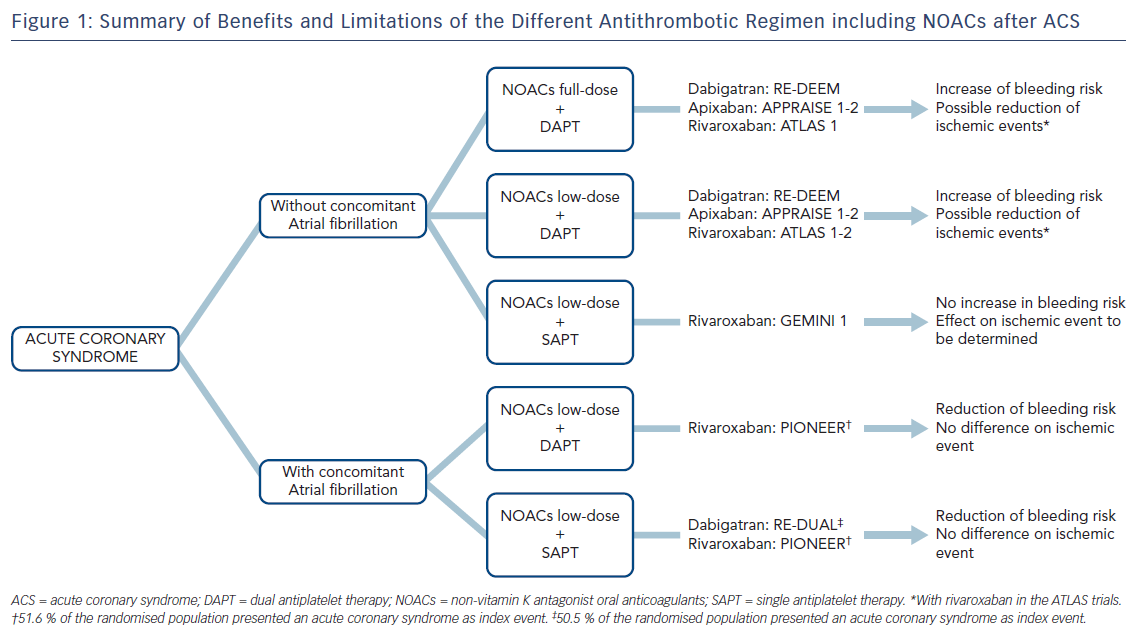 The discrepancy between the results of the APPRAISE-2 and ATLAS 2-TIMI 51 trials may be explained by a higher-risk profile of patients enrolled in the former compared with the latter (Table 2). Indeed, patients from the APPRAISE-2 trial were older and had more frequent diabetes or chronic kidney disease. In ATLAS ACS 2-TIMI 51, prior stroke was an exclusion criterion in patients on DAPT, while approximately 10 % of the APPRAISE-2 study population had a history of cerebrovascular disease. Finally, the dose of apixaban tested in APPRAISE-2 was the same as the one used for thromboembolic prevention of AF, while in ATLAS 2-TIMI 51, relatively lower doses of rivaroxaban were tested.

A lower dose of rivaroxaban in combination with a single antiplatelet therapy was also used in the Study to Compare the Safety of Rivaroxaban Versus Acetylsalicylic Acid in Addition to Either Clopidogrel or Ticagrelor Therapy in Participants With Acute Coronary Syndrome (GEMINI-ACS) 1 trial.30 In this phase II study, 3,037 patients with recent ACS were randomised to receive either rivaroxaban 2.5 mg twice daily or aspirin 100 mg once daily. The randomisation was stratified by the background therapy of either clopidogrel (43.9 % of the patients) or ticagrelor (56.1 % of the patients), which was at the discretion of the treating physician. At a median treatment duration of 291 (range 239–354) days, there was no difference in terms of TIMI clinically significant bleeding between the rivaroxaban and the aspirin group (HR 1.09; 95 % CI [0.8–1.5], p=0.584). The GEMINI-ACS trial demonstrated that the association of NOAC and single antiplatelet therapy was safe after ACS. However, this trial was not powered to show any meaningful differences in ischaemic events between treatment groups. The results of the GEMINI trial were confirmed by a recent meta-analysis of seven randomised trials including 31,574 patients, which showed that the addition of NOACs to a single antiplatelet therapy did not increase the rate of clinically significant bleeding.31 Of note, there was no significant reduction of ischaemic events with this combination. Another meta-analysis looked at the effect of NOAC plus antiplatelet therapy in accordance to baseline clinical presentation in patients with ACS.32 While this treatment strategy was not associated with any benefit in NSTE-ACS patients, it was associated in STEMI patients with a decreased risk of ischaemic events. This analysis suggests that a combination of NOACs plus antiplatelet therapy is an attractive option only in patients with high thrombotic risk, in line with the recent results of the Cardiovascular OutcoMes for People Using Anticoagulation StrategieS (COMPASS) trial on high-risk patients with stable atherosclerotic vascular disease.33 Of note, bleeding risk was increased with adding NOACs to antiplatelet therapy compared with antiplatelet therapy alone in both NSTE-ACS and STEMI patients.

NOACs After ACS Among Patients with Atrial Fibrillation

AF has been reported to occur in up to 21 % of ACS patients.34–36 This particular population constitutes a challenge in terms of prevention of ischaemic events. While DAPT is superior to VKA with respect to the prevention of coronary thrombosis,14,15 VKAs are superior to DAPT regarding the prevention of thromboembolic complications associated with AF.37 Hence, these patients are frequently treated with a triple therapy, including an oral anticoagulant and DAPT,38 which is associated with increased rates of major haemorrhage.39,40 Combinations including NOACs and antiplatelets may reduce the risk of bleeding compared with triple therapy including a VKA. In the Open-Label, Randomized, Controlled, Multicenter Study Exploring Two Treatment Strategies of Rivaroxaban and a Dose-Adjusted Oral Vitamin K Antagonist Treatment Strategy in Subjects With Atrial Fibrillation Who Undergo Percutaneous Coronary Intervention (PIONEER AF-PCI) trial, triple therapy with DAPT plus VKA was compared with two other regimens: rivaroxaban 2.5 mg twice daily plus DAPT for 1 to 12 months; or rivaroxaban 15 mg once daily plus a P2Y12 inhibitor for 12 months.41 The initial presentation was ACS in 51.6 % of patients. At 12 months, rates of clinically significant bleeding were significantly lower in the two groups receiving rivaroxaban compared with standard therapy, with similar rates of ischaemic events. A similar concept was tested with dabigatran in the Randomised Evaluation of Dual Antithrombotic Therapy with Dabigatran versus Triple Therapy with Warfarin in Patients with Non-valvular Atrial Fibrillation Undergoing Percutaneous Coronary Intervention (RE-DUAL PCI) trial.42 The gold standard association of DAPT and VKA was compared with the association of a P2Y12 inhibitor (overwhelmingly clopidogrel) and dabigatran, either 110 mg or 150 mg twice daily. With an ACS for index event for 50.5 % of the population and after a mean follow-up of 14 months, both doses of dabigatran were associated with an improvement in term of ISTH major or clinically relevant bleeding (for 110 mg twice daily HR 0.52, 95 % CI [0.42–0.63], p<0.001; for 150 mg twice daily HR 0.72, 95 % CI [0.58–0.88], p=0.002). The criteria of non-inferiority regarding thromboembolic events, death or unplanned revascularisation was met (HR 1.04, 95 % [CI 0.84–1.29], p=0.005 for non-inferiority for the combined dose of dabigatran).

Similar trials are being performed to evaluate other NOACs agent in the setting of ACS or PCI and AF. The EdoxabaN TReatment versUS Vitamin K Antagonist in PaTients with Atrial Fibrillation undergoing Percutaneous Coronary Intervention (ENTRUST-AF-PCI) trial is testing apixaban 2.5 or 5 mg twice daily (NCT02415400) while the Study of Apixaban in Patients With Atrial Fibrillation, Not Caused by a Heart Valve Problem, Who Are at Risk for Thrombosis (Blood Clots) Due to Having Had a Recent Coronary Event, Such as a Heart Attack or a Procedure to Open the Vessels of the Heart (AUGUSTUS-AF-ACS) trial is testing edoxaban 30 or 60 mg once daily (NCT02866175).

NOACs After ACS: Is There a Role?

While higher doses of NOACs in combination with DAPT have been shown to be associated with decreased ischaemic events, the bleeding risk was markedly increased with these regimens compared with antiplatelet therapy alone in patients after ACS (Figure 1). Conversely, there is evidence that a strategy including lower doses of NOACs in combination with a single antiplatelet therapy may be safe. A significant reduction of ischaemic events associated with this strategy has yet to be proven. Further studies are needed to evaluate the role of NOACs after ACS and to identify the patient population that may benefit the most of such treatment.