My name is Phillip Cuculich, and on behalf of my colleagues and collaborators here at Washington University School of Medicine, in St Louis, I'm honoured to share with you the results from the longer term follow-up of our phase I/phase II study of EP-guided noninvasive cardiac radioablation for the treatment of ventricular tachycardia. A study that we call ENCORE-VT.

Now as heart rhythm specialists, many of us at HRS perform procedures with catheters. We carefully manoeuvre these within and around the heart, meticulously trying to find the critical short circuits of electricity. Once those circuits are identified and discovered, we apply energy at the tip of the catheter which creates heat, to destroy the electrical conduction through these circuits.

However, heat from a catheter is limited, and often we can't reach the deeper elements of the circuit within the heart muscle, and so our procedures can fail. To deliver a full thickness, gap free ablation we look to our radiation oncology colleagues. That's right, our cancer doctors, who have the exact same goals when they're trying to treat tumours.

Now, in the basement of most hospitals you'll find cancers being treated with stereotactic body radiotherapy, or SBRT. Now this concept, x-rays or photons are delivered by a robotic arm in sweeping arcs around the patient delivering high doses of ablative energy to a tumour with minimal exposure to the surrounding tissues. In short cardiac radioablation we simply treat an arrhythmia circuit like a tumour.

In 2007 we reported the first case series using focused cardiac radioablation in five patients, with refractory VT. Based on these results we opened a formal prospective phase I/phase II trial to answer the following question: In patients with VT, who have failed conventional therapies, can a single non-invasive radiation treatment safely reduce VT burden?

Now, the long term results of this trial are shared here, at HRS 2020. So who was included in this study? In general, the 19 patients in this trial had weak hearts, and advanced cardiomyopathy. They had a median of 96 episodes of VT requiring rescue from their defibrillator in the six months before the treatment. And all of them had failed standard therapies such as anti-arrhythmic medicines, or catheter ablations.

Overall, compared to other clinical trials of catheter ablations, this was a very sick patient population. And the median target size for ablation was 25 cc, and to provide some element of reference, a golf ball is about 45 cc. But after we account for the cardiac motion, and the respiratory motion, and set up uncertainties, the actual treated volume was more than 90 cc, and their median treatment time was only 15 minutes.

The first question that we sought to answer, is this safe? And the answer appears to be yes. We're now reporting the results from the past three years. The treatment itself is short and entirely noninvasive. There were no problems with the cardiac devices, both during and after treatment, and patients are treated as outpatients. So literally they get up after treatment and they walk out of the treatment unit and go home.

In the first 90 days of analysis, one patient developed inflammation of the pericardium, called pericarditis. And this was treated successfully with a short course of oral steroid medication. Over the next three years we saw two more patients who had developed fluid around their heart; called a pericardial effusion. And both of these were easily treated with colchicine and anti-inflammatory medication.

Importantly one patient developed a gastropericardial fistula, just after two years after treatment. And this was very near the area that we had treated in the heart, on the inferior wall of the left ventricle. This patient presented with abdominal pain, we were able to make the diagnosis quickly, and this patient underwent a successful corrective surgery. Now to date, no patients have developed heart block, there's been no coronary artery injury, there's been no cardiac perforation.

In general this appears to be a gentle ablation for patients. And this is reflected, I think, in the overall survival. When you look at six months, in this very sick population, 89% of patients were still alive at six months. Which is really superb when you think about this patient population. And over half the patients remain alive at two years.

Now what about the second question, is it effective? Well in this study, this is the first formal study, we chose to look at any reduction in VT burden as our primary endpoint. Now we compared the six months before treatment to the six months after treatment. So at six months, 94% of our patients met the trials primary endpoint, and then continuing out to two years, which we're reporting here, 78% of patients continued to meet that primary end point of VT reduction.

Again, that's not a fair comparison of 24 months after to the six months before, and yet the numbers are still fairly impressive. Now it's important to put this into some context though. Most patients were not free of VT, we were not seeking to cure VT with this. It's a difficult bar to achieve in a salvage patient group, and that wasn't the purpose of our study. We will report a number of pre-specified secondary endpoints, and perhaps the most impactful for patients, in the six months after treatment, 78% of patients did not have a single ICD shock, and this was in the face of de-escalating anti-arrhythmic medicines. Many patients were off anti-arrhythmics entirely. So in conclusion this report is really the first long term follow-up of noninvasive cardiac radioablation, which is critical, because we know radiation can have late adverse effects. And in patients with VT, who failed conventional therapies, a single noninvasive 15 minute focused radiation treatment safely reduced VT burden. And this effect persisted beyond two years for most patients. So far, the serious toxicities appear to be low, but they can occur out to two years and beyond, so long term vigilance is really needed for future trials. And so right now, based off of these results, presented here at HRS 2020, we believe that cardiac radioablation is currently best suited for high risk patients who have failed conventional VT therapies.

Question: How should this study be built upon?

Well I think as we've looked past the last three years now, we've seen multiple case reports, and now four different case series published, that have all generally shown the same thing. That with a single dose of cardiac radioablation, we see a dramatic reduction, and a relatively early reduction in VT burden, in some of the worst cases. This now needs formal follow-up, in a prospective randomised trial, and we're organising this trial now, with the hopes of opening this in Q1 2021. 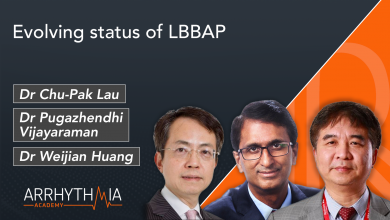 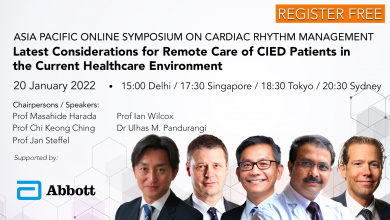 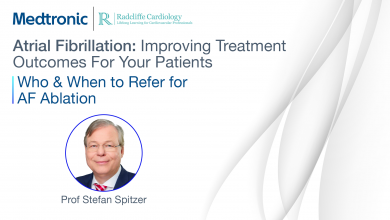 Who & When to Refer for Atrial Fibrillation Ablation 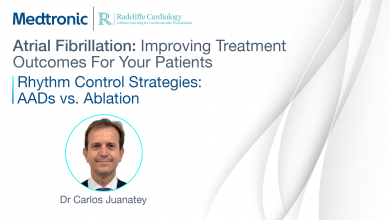 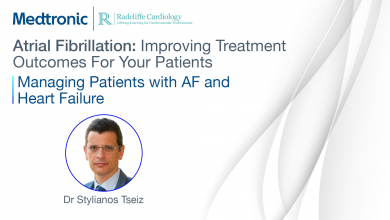