Prof Linde: My name is Cecilia Linde. I'm a Professor at the Karolinska University Hospital and Karolinska Institute in Stockholm, Sweden.

Prof Linde: Well, the background is that not all patients are indicated for cardiac resynchronization therapy, so if you're heart failure patient, 30% will have broad cures and might be indicated, but the rest who do not improve sufficiently for medication actually have an alternative, and that's cardiac contractility modulation.
So cardiac contractility modulation looks like a pacemaker but is not because it delivers stimulatory signals to the ventricular septum, which does not lead to a pace beat, but does increase contractility. So that has been shown to be a valuable therapy in heart failure with reduce ejection fraction. And now we studied in heart failure with preserved ejection fraction.

Prof Linde: Well, the design was a pilot study, which is open, the patients are aware that they got the device, they're aware that they received therapy. It was a multicenter study because we wanted to have a larger group of patients than just a few. And it was a six-month study.
The patient population were HFpEF patients with, or without atrial fibrillation because atrial fibrillation is quite common in heart failure, they had to be symptomatic, they had to have core evaluation of structural parameters indicative of diastolic dysfunction, and they had to elevated NT-proBNP.

Prof Linde: Yes, it is a device that gives electrical therapy which is sensed by the patient, and it has to be delivered seven hours per day to be efficient. And it, it has conventional ventricular leads, so no special equipment, but a special device attached to it. And it's complimentary to medical therapy, so if you respond, you can also envision that patients can tolerate a higher dose of medication, then they would otherwise.

Prof Linde: We had the Kansas City Cardiomyopathy Quality of Life Score as the primary endpoint, together with the safety endpoint, and what we shown was that in those patients after six months compared to baseline, there was an 18 point increment in quality of life which was statistically significant, and this was below be beyond what we had anticipated, we calculated 12.5 points.
So this was a really significant finding. And what is also important about this is that the magnitude of change was so great that it cannot only in our minds be interpreted as a placebo effect, but it is a treatment effect, a top of the placebo effect, and that is a good sign that this may be a therapy to be further studied.

Prof Linde: Now we have to lead the healthcare population, because they need further studies, and we going for HFrEF ejection fraction be between 25 and 45%. And then to be moderately severe symptoms, that is, on the same level as somebody that you would assess for potential cardiac resynchronization therapy. But the patient has to have small, normal cure restoration, below 130 milliseconds to be eligible.

Prof Linde: Well to for the CCM HFpEF study that we did see improvements in quality of life, we did see some structural improvements in diastolic function, and importantly, we saw some improvement in functional loss and less need for heart failure hospitalisation, so the key messages, good signs but needs corroboration in a randomised control trial.
7. Next Steps
Prof Linde: The next step is already ongoing is the AIM HIGHer trial taking place in the United States. This is sham control trial, which offer one third of the patients get no device. So that means that there is a primary endpoint of combination of quality of life and six minute walk, but there's also 18 months endpoint, which covers morbidity, mortality and quality of life as a combined endpoint. So there we'll see if the population with an ejection fraction in between 14 and 60, that is basically covered a big proportion of the HFpEF cohort, if they can benefit from CCM in randomised sham control trial. 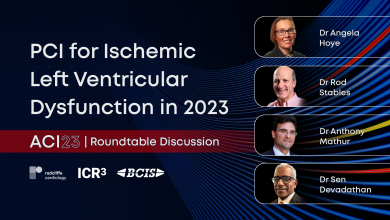