1.Could you summarise the key recent data being reported on DAPT?
2.Was any of this data surprising and does it need further research?
3.Do we need to review the role of aspirin in antiplatelet therapy?
4.Should this data impact practice and potentially guidelines?
5.What is your preferred strategy for stable patients?
6.What is your preferred strategy for ACS patients?

Question 1 : Could you summarise the key recent data being reported on DAPT?

So, in terms of new data on dual antiplatelet therapy, we have various subgroup analysis from the PEGASUS study that show that high-risk patients, those with chronic kidney disease, diabetes, peripheral arterial disease, or more extensive coronary artery disease, benefit more in terms of absolute risk reduction compared to lower risk patients when we use ticagrelor and aspirin, versus aspirin alone. But we've had some more disruptive results recently. So, TWILIGHT study shows that dropping aspirin from a ticagrelor-aspirin combination at three months reduces bleeding, as we would expect, but also didn't seem to have any penalty in terms of ischaemic events. Now, those results seem to be a bit contradictory, those trial results between them. But I think it's important to look at the patient characteristics in some of the subgroups in TWILIGHT. We saw those with chronic kidney disease. The point estimate favoured dual antiplatelet therapy, and that's a group of CKD patients where we see greater absolute risk reductions in PEGASUS. So I think there are still some coherent themes that high-ischaemic-risk patients benefit more from long-term dual antiplatelet therapy, compared to patients with lower risk. And when I say low risks, it's not really so much related to the stenting procedure, because our stent procedures, the implantation techniques and the stents with thinner struts, have much lower long-term risk than they did even five, 10 years ago. So these improvements have made a difference, I think, in terms of what's needed in terms of long-term therapy. So I think that's interesting. And the other thing that's been a bit disruptive is the ISAR-REACT 5 study, showing prasugrel seems to be superior to ticagrelor when given for PCI in ACS patients. But there's a number of issues with that trial. So firstly, there were more stent-thrombosis-related events with ticagrelor compared to prasugrel, surprisingly more. And that doesn't really fit with what our observation in U.K. practise. We've studied more ticagrelor-treated patients in the South Yorkshire region than were put into the ISAR-REACT 5 study in total, and that's not what we've seen. We've seen a big reduction in stent thrombosis with ticagrelor. So there's some uncertainties really about the disconnect between the ISAR-REACT 5 data and what we've seen in practise. But I think partly, that's related to the way the drugs were used, which is not so much how we're using them in the U.K. In the U.K. we're giving ticagrelor up front, more than a few hours, usually a day or so, in the non-STEMI patients before a coronary angiography. And that gives us a chance to assess tolerability and establish the patient on the drug before they have their invasive management. So there's differences there, but I think we can make sense of them.

Question 2 : Was any of this data surprising and does it need further research?

So I think, in terms of the TWILIGHT data, it wasn't surprising that we saw a reduction in bleeding. That's entirely predictable, because when you drop aspirin from aspirin-ticagrelor combination, you get a substantial reduction in platelet inhibition, particularly platelet activation mediated by collagen where aspirin has a big impact on top of drugs like ticagrelor. So if you drop aspirin, you get less platelet inhibition, less bleeding. But, somewhat surprising, there was no hint overall of a difference in ischaemic events. But I think, as I say, that reflects the improvements in stent technology and implantation techniques, which mean that from three months onwards, unless there's risk factors driving ongoing atherothrombotic events, there's little risk of further events. And so, you can afford to reduce your platelet inhibition level at that stage. The magnitude of difference between prasugrel and ticagrelor in ISAR-REACT 5 certainly was surprising. It generates some hypotheses. It doesn't connect with a lot of the observational and previous clinical trial evidence. And so, I think that does require further research, to really understand that and see if we're missing anything that may guide us in terms of future therapy.

Question 3 : Do we need to review the role of aspirin in antiplatelet therapy?

So aspirin is a very reliable antiplatelet drug. We know exactly what it does and it works in virtually everybody who takes it, to a high degree. So it's very predictable and effective from that point of view, particularly in acute myocardial infarction. It's been a bit disappointing in long-term therapy, and that may be for quite complex reasons. But one of the reasons that we know, is that aspirin causes gastric erosions, and that's a problem when you're using it in combination therapy, because it drives an increase in gastrointestinal bleeding beyond the additive effects it has in terms of platelet inhibition. So there are problems with aspirin in terms of long-term therapy. I think we are considering its role. But for the time being, for many of the high-risk patients, it's a very reliable option and has been tested in dual therapy combinations. So, we know where we are with it. In the future, we'll see if there's ways that we can reduce bleeding risk. And there's a lot of research going on to look at how we can maybe use different regimens, or different ways of giving aspirin, that may address some of the gastrointestinal toxicity.

Question 4 : Should this data impact practice and potentially guidelines?

I think we will see the emerging guidelines change in response to some of the recent data. We've certainly seen the Chronic Coronary Syndrome guidelines of the ESC, in 2019, took on board a lot of the evidence from the large phase-three studies like COMPASS and PEGASUS, and I think the more recent studies will have an impact on future guidelines. But accepting that some of the more recent studies have been smaller and with less power, and that may impact on the strength of recommendation in the future guidelines.

Question 5 : What is your preferred strategy for stable patients?

For stable patients, so we have patients who are going for PCI and usually I'll use aspirin and clopidogrel. Accepting that there is some variability in response to clopidogrel, which in the past was certainly an issue. But because of the reduction in stent thrombosis with new stents and our current implantation techniques, that's become less of a concern. So that's allowed us really, to keep on using clopidogrel despite the fact that 30% of patients have a poor response to it. I think, in the future we'll move away from clopidogrel in PCI because of this variability. But we need more studies, for example, looking at monotherapy strategies in very low-risk patients to see whether those are both safe and effective. In terms of high-ischaemic-risk patients who are stable, so if there's no previous history of MI, then we do have the evidence from the COMPASS study showing advantage of aspirin-rivaroxaban 2.5 milligrammes twice daily, versus aspirin in those who both are high ischaemic risk but don't have high bleeding risk conditions. And so, there are patients there where a dual therapy approach is justified. For example, patients with peripheral arterial disease have very high event rates, and those patients warrant more intensive therapy for long-term therapy. So that is something that I'm using in the stable patients who may or may not have previous history of MI, but have this very high long-term atherothrombotic risk. I've got the options of long-term dual antiplatelet therapy or dual antithrombotic therapy with aspirin-rivaroxaban combination.

Question 6 : What is your preferred strategy for ACS patients?

Patients generally are getting ticagrelor and aspirin first line, partly that's because of the U.K. practise. We tend to, particularly in the non-ST elevation ACS population, have some lag before we do the angiogram. And so, to protect the patients in a safe and effective way, giving dual antiplatelet therapy upstream with aspirin-ticagrelor, as were proven in the PLATO study, is a very good option. And then, when the patients come to the cath lab, you know they've got very good level of platelet inhibition, and so you don't need to concern yourself with giving glycoprotein-2-beta inhibitors or other adjunctive therapy other than unfractionated heparin at the time of the procedure. In STEMI patients, we've got the option of aspirin-ticagrelor or aspirin-prasugrel as both very good options for STEMI patients. Little bit of differences in the subgroup data for those drugs, but they're both good options in STEMI patients who are undergoing primary PCI. 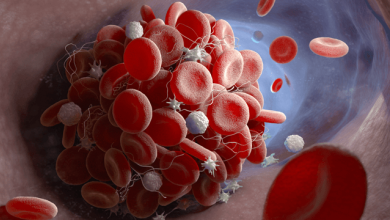 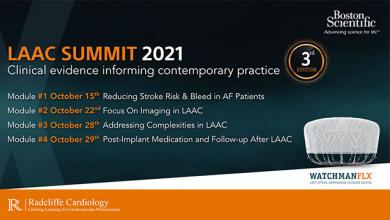 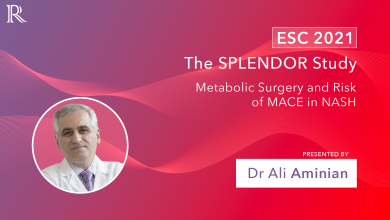 SPLENDOR: Metabolic Surgery and Risk of MACE in NASH