BCIS ACI 2020 : Is DCB Therapy Equivalent to Implantation of DES?

Question 1: There is currently a debate as to whether DCB or DES are equally efficacious in most clinical settings. What factors have prompted this debate?

[Gunn] Drug-coated balloons have now been around for quite a while and there are a number of small-scale studies and some larger registries and one or two larger studies but in niche indications, that have shown non-inferiority, substantially, with the occasional superiority of DCB against DES. And those have been spaced out over the last decade and the problem is that there is no single, large, randomised, control trial in everyday practise. And the other problem is that, in many cases, the DCB was pitted against old-fashioned drug-eluting stents or even bare metal stents. So, we're left with a situation that we have a technology that has a good rationale but not a weight of evidence.

Question 2 : What is your preference?

[Gunn] My preference, as an operator, as with most interventional cardiologists round the world, is to go with the weight of evidence of good quality, modern, second and now third generation drug-eluting stents and the reason for that is the sheer weight of evidence behind them. We can be assured of a good result in the vast majority of cases and the patients do very well, with a very low restenosis rate, a very low thrombosis rate. There are one or two cases where a DCB might be useful but, in the majority of cases, particularly due to the lack of evidence and the lack of trial data, we have to stick with what we have, which is the excellent results that we get with DES.

Question 3 : In which clinical scenarios would you always choose a DCB over DES?

[Gunn] I think that's a very tough question because to say 100% or always in medicine, not just interventional cardiology, is something that we don't do but if I can rephrase the question and say when would it make most sense even if you haven't got a wealth of trial data, then there are a few, actually. So, I would, for instance, consider it if a vessel was small but important and that I didn't want to put a stent in for some important reason and one can think of scenarios like, for instance, a frail, elderly person who's at risk of bleeding and you might want to stop the antiplatelet therapy early. Or an important branch coming out of that small vessel that needs treatment and you really don't want to put a double-layer of metal in or a two-stent strategy. Conceivably, some cases of in-stent restenosis because most of the evidence for DCBs is in that group but if you're asking me always, no, not always.

Question 4 : In which clinical scenarios would you always chose a DES over DCB?

[Gunn] So, I use a stent in most clinical scenarios, national data and international data suggests that about 90% of angioplasties done now use a modern drug-eluting stent but 10% don't and we don't use a DCB in those so what's going on there? Well, probably they are using another technology, proportionately, using ordinary balloons and we must remind ourselves that balloons are effective, it's just that, in trial data, in everyday practise and the majority of lesions, the majority of patients, DES is better.

Question 5 : Do you think your peers agree with your opinion?

[Gunn] Yes, in general terms, I think most interventional cardiologists would agree with me. It's quite interesting to know that a lot of them would be prepared to participate in a large, randomised control trial. The challenges are that we've had stents around for so long and they've become so good and we've become so reliant upon them that it's an easy fix for us to put a stent in but a lot of us would be prepared, as good clinical scientists, to learn how to do DCB deployment properly and expose it to a proper randomised control trial to see if the rationale, which is quite good, holds up in everyday practise.

Question 6 : What further research/data is required to provide a definitive answer?

[Gunn] So, at the moment, we've got small packets of data in niche indications. What I think a number of us would really like to see is a large study and that might well require several thousand patients, with good quality clinical endpoints in everyday circumstances, the sort of patients we treat on a daily basis. Other smaller studies could be undertaken in niche indications, such as in-stent restenosis, small vessels. A particularly attractive possibility is in primary angioplasty for ST-elevation myocardial infarction. In those circumstances, it would be really nice if you could get away without inserting metal. Most of us that have been living and practising through the era of stent development, are still mildly horrified that we're leaving metal behind in patients, we'd really rather get rid of it. We tried with bioresorbable scaffolds and, no doubt, they will come on stream in due case but drug-coated balloons may have a future but we really must have a trial. 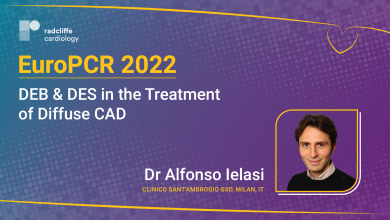 EuroPCR 22: DEB & DES in the Treatment of Diffuse CAD 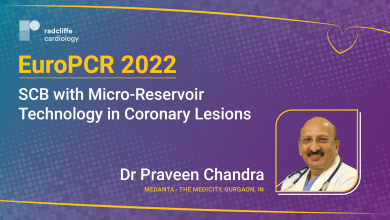 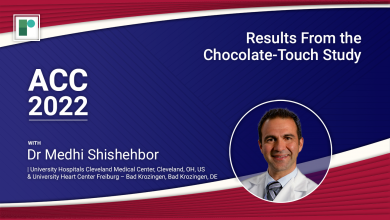 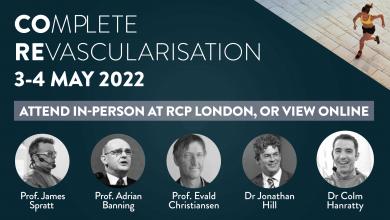