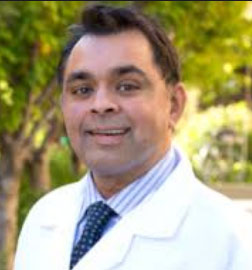 Prof Sanjiv M. Narayan was born on April 29, 1964, in Aylesbury, Buckinghamshire before his parents moved to Birmingham, UK.1 He is a cardiac electrophysiologist and speaks English, French and Hindi.4

As a child, he was fascinated with computers but then decided to follow in his father’s footsteps and became a doctor and a computer engineer.2 In the field of cardiac electrophysiology, he has been able to combine the two to practice innovative medicine.

He and his wife have three children. They enjoy music, history, politics, swimming, biking, skiing and travel.1

He completed his medical training in 1987, his Masters in Computer Science in 1990 and earned his MD in 1994 from the University of Birmingham.1 In software engineering, he focused on neural networks. He gained membership (MRCP) and fellowship (FRCP) of the Royal College of Physicians of London then moved to the computational neuroimaging lab of Dr Arthur Toga, PhD at UCLA where he developed optical mapping systems and image processing software and studied somatosensory cortex in rodents.1

He completed his residency in internal medicine at Mount Auburn Hospital/Harvard and fellowships in Cardiology and Cardiac Electrophysiology under Michael Cain and Bruce Lindsay at Barnes Hospital/Washington University. His research is at the intersection of clinical cardiac electrophysiology and bioengineering. He pioneered efforts for panoramic mapping of atrial fibrillation using global multipolar mapping catheters and artificial intelligence (AI) algorithms to separate physiological signals from noise.3

Prof Narayan is a cardiologist and professor of medicine at Stanford University and a biomedical engineer. At Stanford, he directs the university's atrial fibrillation and electrophysiology research programs. He is also co-founder and director of the Computational Arrhythmia Research Laboratory (CARL), also known as the Stanford Arrhythmia Center.

From 2008 to 2013, Prof Narayan was a visiting professor at various national and international institutions.5 He also co-developed the cardiac fibrillation therapy focal impulse and rotor modulation (FIRM), which was acquired by Abbott Laboratories in 2014.

Prof Narayan is on the Arrhythmia & Electrophysiology Review editorial board.