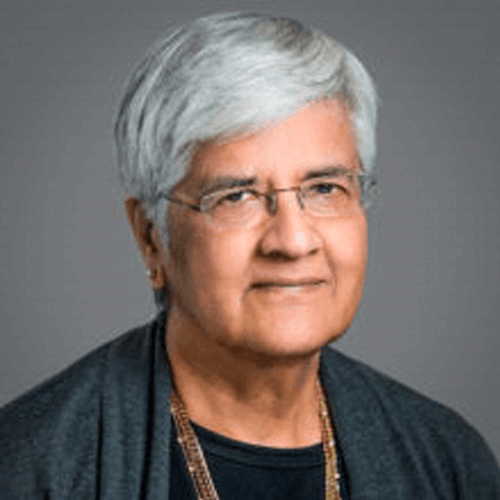 Dr Renu Virmani was born in 1943 in Pakistan. Her father was an industrialist of Delhi and Amritsar, India.2

As the youngest girl in a family of ten children, Dr Virmani was always driven to stand out and excel. Her aunt, who was a neurologist, was instrumental in forging her ambitions to pursue medicine. “I admired her and she showed me that women can do whatever they want,” she says.10

After meeting Professor Sylvan Weinburg, an influential cardiologist and president of the American College of Cardiology, she was introduced to Dr William (Bill) Roberts, who was known as ‘the man’ of cardiac pathology at the time.10 With Dr Roberts as her mentor, she began her journey towards qualifying as a cardiac pathologist.

Virmani and her husband have a shared love of travel and support each other in their dedication to their demanding careers.2 They have two children and three grandchildren.8 Her favourite travel destinations are European cities and Manhattan.9

She completed residencies in Gynecology, Obstetrics and Internal Medicine at Maulana Azad Medical College, New Delhi. Her Fellowships in Pathology were at the National Heart, Lung and Blood Institute in Bethesda, the Lala Lajpat Rai Memorial College and Hospital in Meerut and the George Washington University Medical Center in Washington, D.C.

After her fellowships, Dr Virmani returned to the National Heart, Lung and Blood Institute as a staff fellow until being hired as a staff pathologist at the Armed Forces Institute of Pathology (AFIP).2 She then left for Vanderbilt to work as Director of the Autopsy Service, but returned to AFIP in 1984 when she was offered the position of Chair of the Department of Cardiovascular Pathology.2 She also served in the reserves until 1989, based at Walter Reed Army Medical Center.2

Currently, Dr Virmani serves as the President of CVPath Institute, which she founded in 2005.7 It is an independent non-profit organization in Gaithersburg, MD dedicated to the study of cardiovascular diseases.

She is a Clinical Professor at the Department of Pathology at Georgetown University, University of Maryland-Baltimore, George Washington University and Vanderbilt University.10

She is responsible for multiple research grants in the field of cardiovascular pathology and has authored or co-authored over 850 publications in peer-reviewed journals in the field of atherosclerosis, vulnerable plaque, stents and other cardiovascular diseases. She has edited 7 books and contributed over 100 book chapters.5 She regularly reviews manuscripts for a number of major scientific journals.

Dr Virmani is on the editorial board for Interventional Cardiology: Reviews, Research, Resources.

https://doi.org/10.15420/icr.2011.6.2.104
A Selection of Significant Papers from the Past Year as Recommended by the European Cardiolovascular Disease 2006 Advisory Panel