Albert Ferro studied Medicine at King’s College London (1978-1984), obtaining a 1st Class Honours intercalated BSc degree in Biochemistry in 1981. Following General Professional Training in Internal Medicine, he obtained MRCP(UK) in 1988, after which he worked for 2 years as a Registrar in Medicine at the Royal London Hospital. In 1990, he obtained an MRC Training Fellowship to undertake his PhD in Clinical Pharmacology at the University of Cambridge, which he completed in 1993.

Following 2 further years of training as a Registrar in Cardiovascular Medicine at Bristol Royal Infirmary, he was Senior Registrar in Clinical Pharmacology at the Hammersmith Hospital from 1995 to 1996 before appointment to his current position (initially as Senior Lecturer, and successively Reader and Professor).

Dr Albert Ferro is on the Editorial Board of European Cardiology Review. 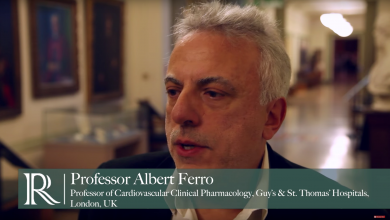