Cardiovascular-related sudden death is the leading cause of mortality in athletes during sport. Thus, it is of clinical importance to identify ECG changes that represent normal adaptation in athletes, and differentiate them from truly pathological findings. However, a distinction between adaptive and pathological ECG changes in athletes is not always easy. This article discusses exercise-induced ECG changes and the differential diagnosis of conditions that present with similar ECG patterns.

Sudden Cardiac Death in Athletes
Cardiovascular-related sudden death is the leading cause of mortality in athletes during sport.1,2 The incidence of sports-related sudden death of any cause in the general population is 0.5-1.7 per 100,000 persons per year.3 This is higher in professional athletes, with a reported incidence of sudden cardiac death (SCD) as 1/43,770 participants per year in the National Collegiate Athletic Association (NCAA),1 and 1/3,100 per year among NCAA Division I male basketball players.1 In other studies, the reported incidence of SCD ranges from 0.26 to 3.60/100,000 per year with the higher rates seen in African/Afro-Caribbean (black) athletes.2,4-8 For comparison, the incidence of SCD in the general population, not necessarily related to sport, is estimated at 100-200/100,000 annually and increases as a function of advancing age, being 100-fold less in adolescents and adults younger than 30 years (1/100,000) than it is in adults older than 35 years.9-11

Vigorous exertion may trigger cardiac arrest or SCD, especially in untrained persons, but habitual vigorous exercise diminishes the risk of sudden death during vigorous exertion.12 Most studies have found inverse associations between regular physical activity and SCD.13 Concerning sports-related sudden death in the general population, a clear diagnosis is made in <25 % of the cases, but is most frequently an acute coronary syndrome (75 %).3 In trained athletes, a diagnosis is usually made in up to 65 % of the cases and usually is cardiovascular disease such as hypertrophic cardiomyopathy (HCM), arrhythmogenic right ventricular cardiomyopathy (ARVC), congenital coronary anomalies, genetic channelopathies and myocarditis, with blunt trauma, commotio cordis and heat stroke being less frequent (see Table 1).2-4 Recently, findings from the Race Associated Cardiac Arrest Event Registry (RACER) initiative indicate that marathons and half-marathons are associated with a low overall risk of cardiac arrest (1/184,000) or sudden death (1/259,000). However, event rates, most commonly attributable to hypertrophic cardiomyopathy or atherosclerotic coronary disease, have risen over the past decade among male marathon runners.14

A mandatory national pre-participation screening strategy with routine electrocardiograms (ECGs) is recommended by the European Society of Cardiology (ESC)15 and the International Olympic Committee,16 mainly based on the beneficial results of screening observed in the Veneto region of Italy.5 The American Heart Association has expressed reservations about the cost-efficiency of this approach, and does not endorse ESC screening.17 Although debatable,2,7 the recent report on data from the US NCAA argues for closer scrutiny.1 Regardless, it is of clinical importance to identify ECG changes that represent normal adaptation in athletes, and differentiate them from truly pathological findings.

Exercise-induced Electrocardiogram Remodeling
A differentiation between adaptive and pathological ECG changes in athletes is not always easy.18 Recommendations have been published by the ESC,16 a group of US experts,19 and recently, by an international group of experts in sports cardiology and sports medicine (Seattle criteria, see Tables 2-4).20

Left Ventricular Hypertrophy
Left ventricular (LV) hypertrophy and dilation occurs with isotonic exercise, whereas isometric exercise will promote LV hypertrophy alone.21 The single most common cardiovascular cause of these unexpected catastrophes appears to be HCM, accounting for about one-third of cases (see Figure 1).22,23 Wall thickness resembling HCM may occur in sporting disciplines that combine isometric and isotonic activity, such as cycling and rowing. Since the phenotypic expression of HCM is variable, and not uncommonly includes patients with mild and localised LV hypertrophy, the differential diagnosis with athlete's heart may be difficult. Usually, however, by contrast to most patients with HCM, athletes have increased left and right ventricular cavity dimensions, and normal diastolic function.22-24 Physiological LV hypertrophy can also be differentiated from hypertrophic cardiomyopathy by tissue Doppler imaging velocity measurements.25 In some cases, protracted deconditioning may be the only way to establish a diagnosis. LV hypertrophy certainly needs further evaluation in the presence of family history of SCD or non-voltage ECG criteria suggesting pathological ECG hypertrophy.

Q Waves
Q waves >3 millimetres (mm) in depth and/or >40 milliseconds (ms) duration in any lead except aVR, III and V1, suggest HCM. Standard criteria for myocardial infarction26 in athletes should also be considered in those >40 years of age.

Early Repolarization and ST-T Abnormalities
Early repolarization is defined electrocardiographically by either a sharp well defined positive deflection or notch immediately following a positive QRS complex at the onset of the ST-segment, or slurring at the terminal part of the QRS complex (J-waves or J-point elevation, see Figure 2).27 The early repolarization pattern has long been considered to be a benign ECG manifestation (6-13 % in the general population) that is seen more commonly in young healthy men and athletes (22-44 %), and its clinical significance has been questioned.28 Inferolateral early repolarization may be seen in young athletes and is a dynamic phenomenon caused by exercise.29

However, there are data indicating that the early repolarization pattern may be associated with a risk for ventricular fibrillation (VF) and SCD, depending on the location of early repolarization, magnitude of the J-wave and degree of any ST elevation present.27,30-35 A horizontal/descending type (defined as Ôëñ0.1 millivolt (mV) elevation of the ST-segment within 100 ms after the J-point) in the inferior leads, as opposed to a rapidly ascending ST-segment type, may help to identify those individuals who are clearly at risk (see Figures 3 and 4).33,34 However, several obscure points remain with this syndrome. In the Atherosclerosis Risk in Communities (ARIC) study, J-point elevation was associated with an increased risk of SCD in whites and in females, but not in blacks or males.32 An early repolarization pattern in the inferolateral leads occurs in 5 % of apparently healthy individuals,31,36 it may not be consistently seen, and even the horizontal/ descending ST type was seen in 3 % of controls.33,34 A pattern of J-wave and/or QRS slurring (but not of ST elevation) has been associated with cardiac arrest/sudden death in athletes,37 but many healthy athletes have early repolarization with a rapidly ascending pattern. Thus, interpretation of this ECG pattern is not always straightforward.

Another confounding factor is the type of ST-segment elevation encountered in well-trained athletes.38 Two types predominate; an elevated ST-segment with upward concavity and positive T-wave is seen in Caucasians, and an elevated ST-segment with upward convexity and negative T-wave in African-Caribbean athletes (see Figures 5 and 6). ST-segment elevation is distinguished from Brugada syndrome by an upslope rather than a downslope pattern, and by remaining largely unaffected when challenged with a sodium channel blocker (see Figures 7-9).39,40 African athletes display a large proportion of ECG abnormalities, including an increase in R/S-wave voltage, ST-segment elevation and inverted or diffusely flat T-waves.41 T-wave inversion in the lateral leads is not a training-related phenomenon and may represent the initial expression of underlying cardiomyopathy. However, T-wave inversions in leads V1-V4, appear to represent an ethnic variant of athletes heart.42 Among other conditions, this pattern may also be seen in ARVC (see Figure 10). 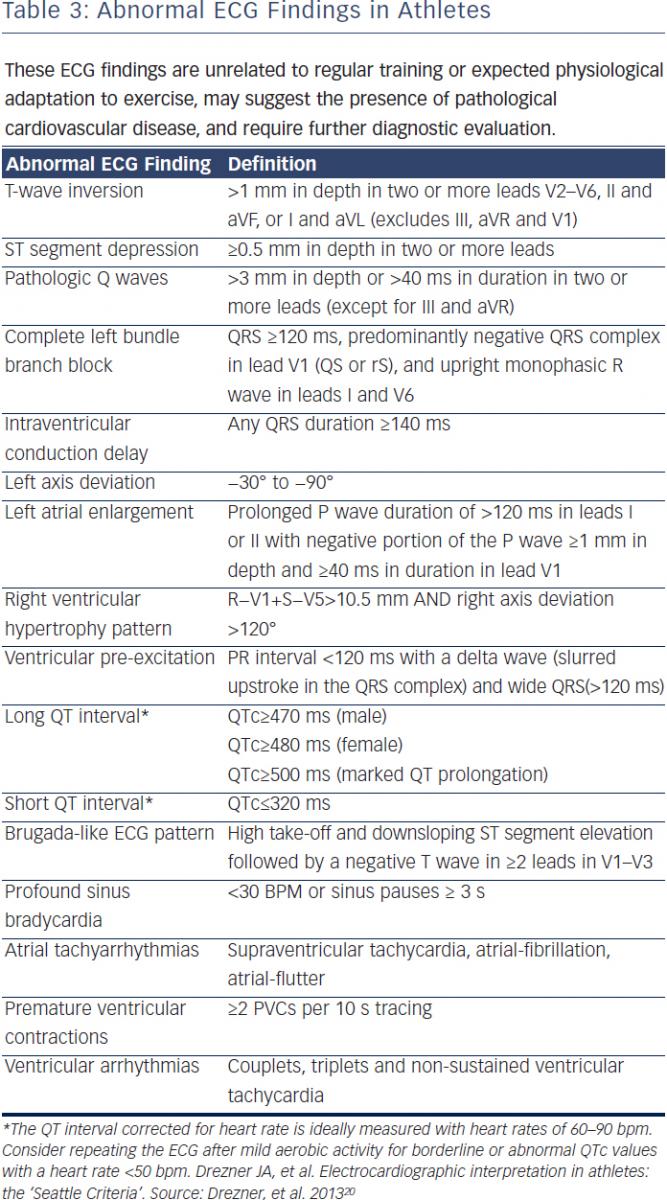 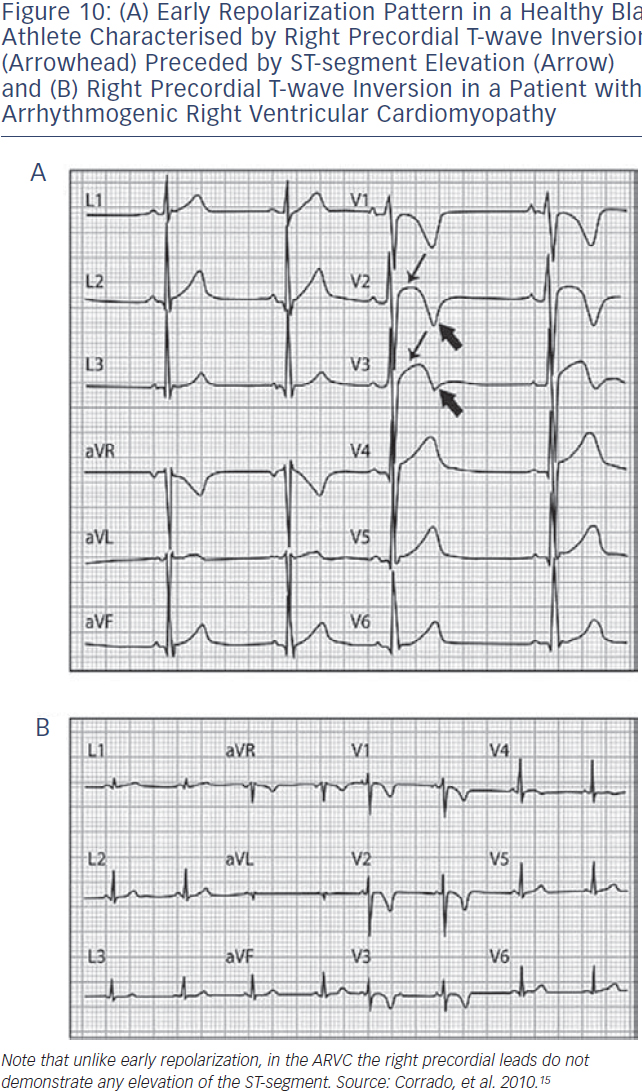 Right Ventricular Abnormalities
Right ventricular (RV) dilatation and increased free wall thickness have been seen in athletes who perform isotonic or isometric exercise. In black athletes without concomitant symptoms or family history, T-wave inversion and RV enlargement may be a benign finding.43 Recently, intensive, endurance exercise of increased duration (i.e. marathon runners) was reported to result in transient RV dysfunction that is usually reversible, although septal fibrosis was seen in athletes who undergo intensive training for prolonged periods.41 The clinical significance of this observation is uncertain. ARVC is a rare condition, with an estimated prevalence in the general population ranging from 0.10 to 0.02 %,42 but it represents one of the most arrhythmogenic forms of human heart disease and a major cause of sudden death in the young45 (see Figures 10 and 11). Arrhythmias originating from the right ventricular outflow tract (RVOT) either in the form of frequent ventricular ectopics or sustained or not-sustained ventricular tachycardia (VT), may represent idiopathic VT (a rather benign condition) or ARVC. An electrocardiographic scoring system for distinguishing RVOT arrhythmias in patients with ARVC from idiopathic VT has been developed and may be applied to VT or ventricular ectopics46 (see Figure 12 and Table 5).

Bundle Branch Block
Incomplete right bundle branch block (RBBB) (QRS <120 ms) is common. However, it should be differentiated from ARVC and Brugada syndrome. Complete left bundle branch block (LBBB) or RBBB with hemiblock necessitates cardiological work-up including myocardial imaging. ECG of the siblings should also be obtained to exclude genetically determined atrioventricular (AV) conduction disease. Brugada syndrome can also be masked by complete RBBB. For diagnosis in cases of clinical suspicion, relief of RBBB, demonstration of typical ST-segment elevation on repeated ECG recordings, pharmacological tests, or pacing from the right ventricle can be useful.47 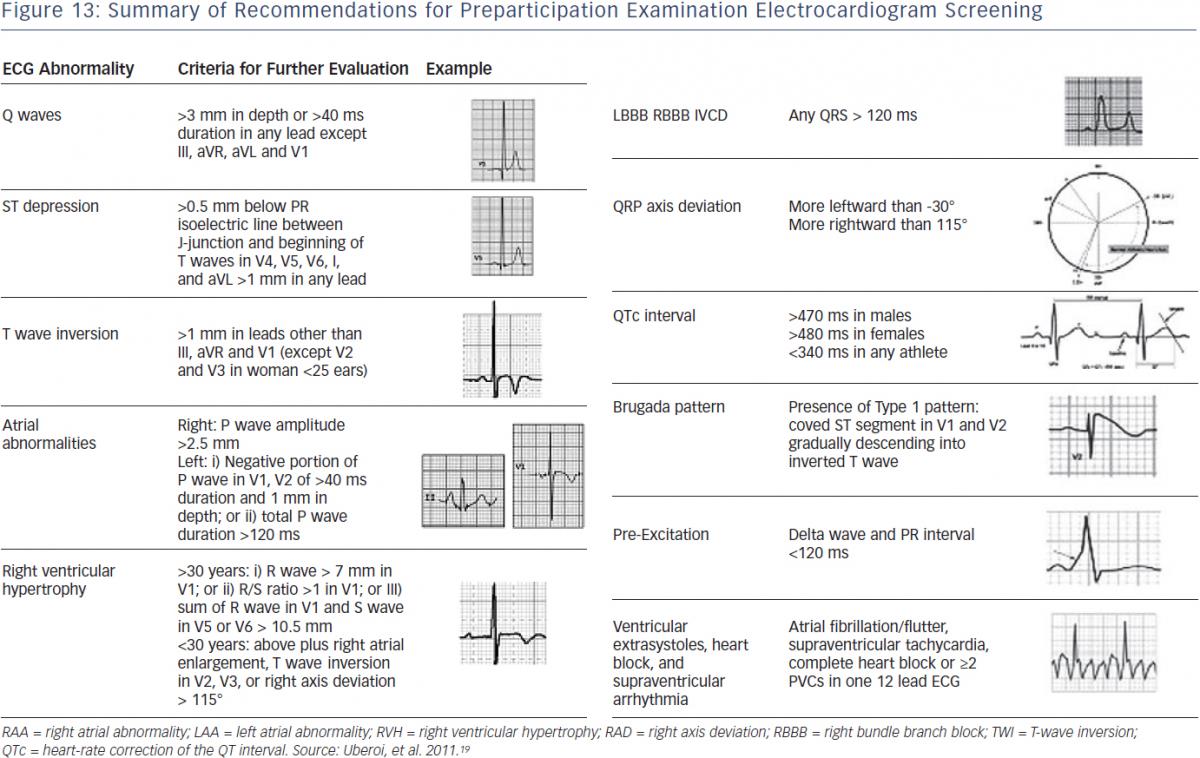 QT Interval
Suspicion of long QT (>470 ms in men and >480 ms in women) or short QT (<340 ms) should lead to evaluation by a specialist. A QTC 380 ms may also be a marker of abuse of anabolic-androgenic steroids. Recommendations for pre-participation ECG screening are presented in Figure 13.