Hypertension and heart failure are important contributors to global morbidity and mortality. Despite therapeutic lifestyle and pharmacological measures, a significant proportion of people with hypertension do not reach treatment targets. Patients with resistant or poorly controlled hypertension are at significantly increased risk of cardiovascular events, including heart failure. Since dysfunction of the sympathetic nervous system appears to play a key role in the development and progression of both hypertension and heart failure, these patients may benefit from treatment modalities aimed at reducing sympathetic function. The purpose of this paper is to provide an overview of baroreflex activation therapy as a potential treatment strategy in patients with resistant hypertension or heart failure.

Hypertension is significantly associated with subclinical and clinical cardiovascular disease, including left ventricular remodeling and overt heart failure.14–16 This risk is considerably greater among patients with resistant or poorly controlled hypertension, particularly if the condition is persistent.5,6,8,17–20 By extension, many patients with heart failure remain symptomatic and limited in their daily activities despite guideline-recommended drug and device therapy.21,22 Since dysfunction of the sympathetic nervous system appears to play a key role in the development and progression of hypertension and heart failure, treatment modalities aimed at reducing sympathetic function may be beneficial.23–25 Padmanabhan et al. recently published a review of one such intervention, renal denervation.26 Renal denervation may be associated with significant blood pressure reductions compared with sham control, particularly found in trials of second-generation renal denervation systems.27,28 By extension, the purpose of this paper is to provide an overview of baroreflex activation therapy (BAT) as a potential treatment strategy in patients with resistant hypertension or heart failure, respectively. 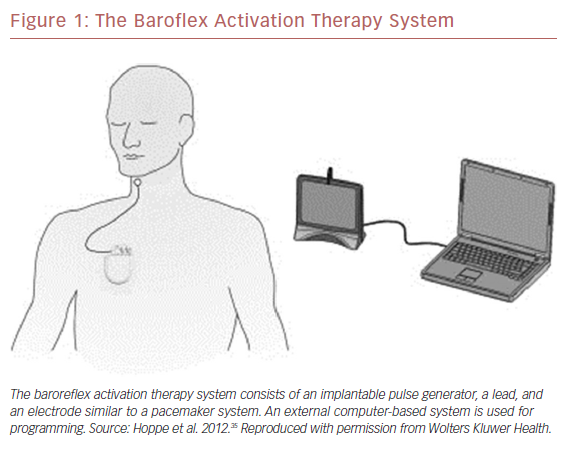 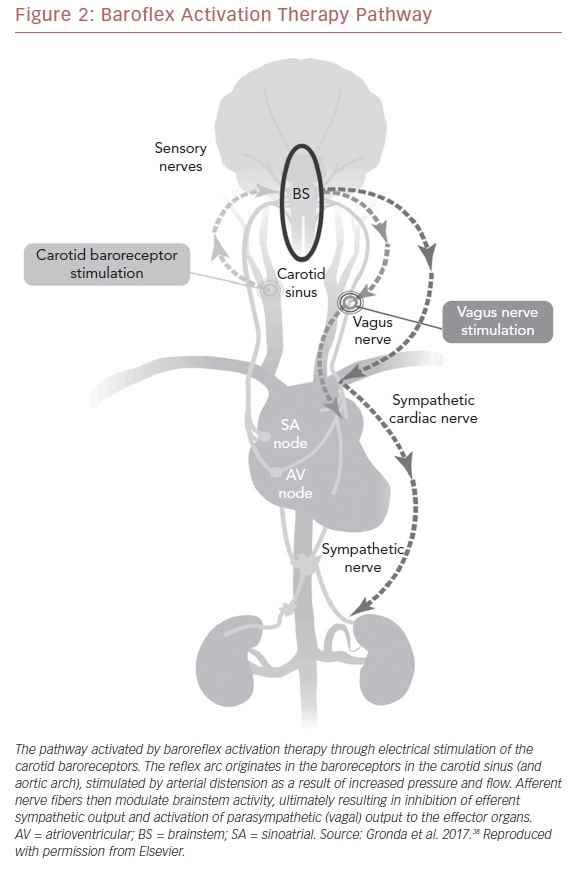 Role of the Sympathetic Nervous System in Hypertension and Heart Failure

The pathogenesis of essential hypertension is complex and multifactorial, but the sympathetic nervous system may be particularly and persistently overactive in patients with resistant hypertension, exerting direct effects on not only the heart and vasculature, but also the renin–angiotensin–aldosterone system, glomerular filtration and renal tubular sodium reabsorption.25,29,30 Baroreflex impairment appears to be a crucial component in the dysfunction of the sympathetic nervous system, probably through an abnormally reduced ability to exert sympathoinhibition.29,30

The Concept of Baroreflex Activation Therapy

Carotid BAT consists of leads placed adjacent to the carotid sinus, an implantable pulse generator, and an external programming system (Figure 1).35 Electronic stimulation of the baroreceptors elicit the baroreflex, resulting in reduced sympathetic and increased vagal tone (Figure 2).36,37 Blood pressure reduction and improvements in cardiac structure and function ensue.38 The first experiments in humans were performed more than 60 years ago when Carlsten et al. observed that direct stimulation of the carotid sinus nerve resulted in an acute decline in blood pressure in patients undergoing surgery for neck cancer.39 In 1967, Braunwald et al. extended the possible uses of BAT as they found instantaneous relief of otherwise incapacitating angina pectoris using carotid stimulation.40 Although BAT received little or no attention for decades thereafter, primarily due to successful drug development, an increasing need for alternative treatment approaches for resistant hypertension and heart failure has prompted renewed research in this area.35,41–43

Feasibility studies of the first-generation Rheos® Baroreflex Hypertension Therapy System (CVRx) (Figure 3), such as the non-randomized Device Based Therapy in Hypertension Trial (DEBuT-HT) showed substantial and sustained reductions in both systolic and diastolic blood pressures.36,41,44,45

In the subsequent Rheos Pivotal Trial, patients with office systolic blood pressure ≥160 mmHg and diastolic blood pressure ≥80 mmHg taken after ≥1 month of maximally tolerated therapy with ≥3 antihypertensive drugs underwent device implantation and underwent blinded randomization 2:1 to immediate (1 month after implantation; n=181) or deferred (7 months after implantation; n=84) activation.46 Although lead implantation was bilateral, 75% of patients only required unilateral activation. All participants were followed for an additional 6 months. The investigators tested five co-primary endpoints of which sustained efficacy, BAT safety and device safety were met. However, acute efficacy (≥10 mmHg systolic blood pressure reduction at 6 months with immediate versus deferred activation, 54% versus 46%; p=0.97) and procedural safety endpoints were not met. Blood pressure reductions were maintained beyond the duration of the trial.47,48

Due to these shortcomings, the second-generation, minimally invasive Barostim neo™ system (CVRx) was developed and examined in an open-label trial (Figure 3).35,36 The device was implanted in 30 patients with systolic blood pressure ≥140 mmHg despite taking ≥3 antihypertensive drugs and deemed compliant with their regimen. Only unilateral carotid sinus exposure was required. The primary efficacy endpoint was reduction in office systolic blood pressure compared with baseline. System- and procedure-related complications comprised the primary safety endpoint. At 6 months, average systolic and diastolic blood pressures had decreased by 26 mmHg and 12 mmHg, respectively (p<0.001 for both). Three complications occurred within 30 days after surgery, and beyond this perioperative period, one system-related complication was reported. Interestingly, six of 30 participants in the Barostim neo trial had undergone unsuccessful renal denervation but achieved blood pressure reductions with BAT that were comparable to those who had not undergone renal denervation.

A recent systematic review and meta-analysis of the efficacy and safety of BAT for resistant hypertension found that although device therapy significantly lowered blood pressure, the evidence was limited by a high risk of bias, small sample size, and the fact that only one randomized controlled trial (the Rheos Pivotal Trial) was included in the analysis.52 Indeed, regression towards the mean and placebo effect may, at least in part, have been responsible for the results obtained from observational studies.

Gronda et al. implanted the Barostim neo system in 11 patients who had New York Heart Association (NYHA) class III heart failure, a left ventricular ejection fraction (LVEF) ≤40%, and no indication for cardiac resynchronization therapy.53 The patients’ 6-minute walking distance increased significantly at 6 months, with an average of approximately 50 m (p=0.05). Favorable effects were also seen for LVEF, NYHA class, and quality of life (p<0.05 for all) and were maintained beyond the initial 6-month study period.54,55 However, no significant changes were observed for systolic or diastolic blood pressure. 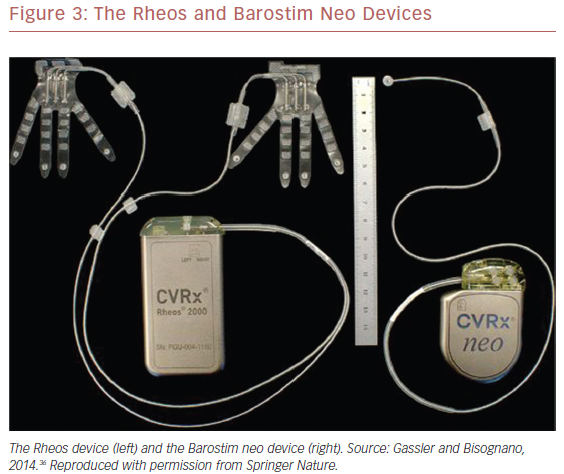 The larger, controlled, open-label Barostim Hope for Heart Failure (HOPE4HF) study randomized patients with NYHA class III heart failure and LVEF ≤35% to receive either BAT (Barostim neo) plus guideline-directed medical therapy (n=76) or medical therapy alone (n=70) for 6 months.42 The primary safety endpoint, system- and procedure-related major adverse neurological and cardiovascular events, occurred in 2.8% of patients in the BAT group. Changes in NYHA class, quality of life, and 6-minute walk distance comprised the co-primary efficacy endpoints, all of which were significantly improved with BAT (p<0.05) and results were maintained at 12 months.56 The effects of BAT were more prominent in patients without a cardiac resynchronization therapy device, but did not differ between those with or without coronary artery disease.57,58 BAT has also been found to be cost-effective compared with optimal medical treatment in patients with NYHA class III heart failure who are not eligible for cardiac resynchronization therapy.59

BAT implantation is generally well tolerated.35,41,42 It is associated with complications similar to those observed with cardiac pacemaker implantations, including device pocket hematoma, pneumothorax, and pain. Complication rates also appear to mimic those seen with permanent pacemaker implantation. In a cohort of 42 patients, Wallbach et al. reported that almost all experienced mild adverse events in the first 6 months after implantation and activation of the Barostim neo apparatus, but most could be resolved by optimization of device parameters, that is, amplitude, impulse width, and stimulation frequency.60 One patient experienced a stroke with recovery and another a contralateral carotid artery stenosis during the perioperative period. One died during the observational period of 12 months. In a separate study, Heusser et al. noted that stimulation intensities had to be lowered in 12 of 18 patients, resulting in lower efficacy.61 As with any other invasive therapy, safety is expected to improve over time. Finally, the pulse generator battery needs to be replaced approximately every 3 years.

Due to the paucity of evidence, contemporary ESC/ESH guidelines do not routinely recommend BAT for the treatment of hypertension (class of recommendation III, level of evidence B).11 The ACC/AHA guidelines also consider device therapy investigational and as such, provide no recommendation.12,13

The double-blind, randomized trial, the Effect of Baroreflex Activation Therapy on Blood Pressure and Sympathetic Function in Patients with Resistant Hypertension (The Nordic BAT Study), aims to recruit about 100 participants and examine whether use of the Barostim neo device reduces 24-hour systolic ambulatory blood pressure compared with pharmacotherapy alone (NCT02572024).62

Additionally, the open-label Baroreflex Activation Therapy for Heart Failure (BeAT-HF) trial (NCT02627196) will randomize patients with NYHA class II or III heart failure and LVEF ≤35% to either BAT with Barostim neo or guideline-directed medical therapy alone and assess the primary endpoint of cardiovascular mortality or heart failure morbidity. A total of 938 participants have been recruited and will be followed until 2021.

Finally, the Economic Evaluation of Baroreceptor STIMulation for the Treatment of Resistant HyperTensioN (ESTIM-rHTN; NCT02364310) is examining the cost-effectiveness of using Barostim neo compared with standard care in patients with resistant hypertension.

Investigations of a closely related, even less invasive, concept are also ongoing.63 The endovascular baroreceptor amplification device (carotid bulb expansion device), MobiusHD™ (Vascular Dynamics) was evaluated in the Controlling and Lowering Blood Pressure With the MOBIUSHD (CALM-FIM_EUR) study, including 30 patients with office systolic blood pressure ≥160 mmHg despite ≥3 antihypertensive drugs.64 Mean office blood pressure was reduced by 24/12 mmHg at 6 months (p<0.001 for both systolic and diastolic blood pressure), with a total of five safety events. The US arm of the study, Controlling and Lowering Blood Pressure with the MOBIUSHD™ (CALM-FIM_US) (NCT01831895), is currently ongoing. The related Controlling and Lowering Blood Pressure with the MobiusHD™ (CALM-2) study (NCT03179800) aims to examine the safety and efficacy of the MobiusHD device in a prospective, randomized, double-blind, sham-controlled fashion.

BAT is a potential treatment modality for patients with resistant hypertension and heart failure. However, long-term follow-up from larger randomized, sham-controlled, blinded studies is needed to properly assess its efficacy and safety.