Dr Emma Svennberg (Karolinska Institute, Stockholm, SW) summarises the findings from the Systematic ECG Screening for Atrial Fibrillation Among 75-Year-Old Subjects in the Region of Stockholm and Halland, Sweden (STROKESTOP Study). The aim of this study is to determine whether screening for atrial fibrillation by intermittent ECG recording and initiation of anticoagulation treatment among high-risk individuals is cost-effective and can lower the incidence of stroke.

- [Instructor] Hi, my name is Emma Svennberg, I'm a cardiologist at the Karolinska University Hospital, the Karolinska Institute in Stockholm, Sweden. And I appreciate the opportunity to discuss with you today about the findings from our study, the STROKESTOP study, a systematic screening study for atrial fibrillation looking at clinical outcomes. Please note my conflicts of interest.

This was a very pragmatic study and what we did was we identified all residents aged 75 and 76 in two regions of Sweden. There were no exclusion criteria. All those identified were randomised in a one-to-one fashion, into a group, invited to screening or into a controlled group. They were then followed for a minimum of five years with regards to our primary endpoint, a combined endpoint of ischaemic stroke, systemic thromboembolism, all-cause mortality, and severe bleeding.

Overall, we identified more than 28,000 75- and 76-year-olds residing in our two regions. A small proportion of patients were excluded due to death or immigration prior to our screening intervention. But overall, almost 14,000 individuals were randomised to be invited to screening or to control group. All of these were followed for a minimum of 5.6 years. There was no loss of follow-up.

Looking at the group invited to screening, we could see after our screening intervention that the diagnosis of atrial fibrillation became significantly more common as compared to the control group. The clinical characteristics of the group, randomised to screening and randomised to control were as expected very similar.

On average, they were 76 years old, a small a little more women than men participate or were invited to screening or to controlled. And the CHADSVASc was 3.5 on average.

However, one must bear in mind when interpreting these results that these participants were also more healthy as compared to the non-participants.

Thank you very much for your attention. And I would also like to thank our financial sponsors of the trial.

Annual Update: The State of the Field in Cardiac Unloading 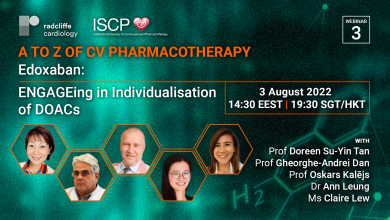 Edoxaban: ENGAGEing in Individualisation of DOACs 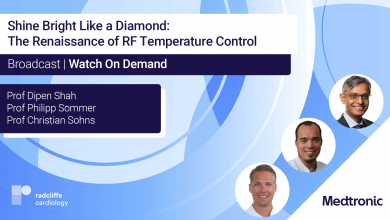 Use of the DiamondTemp™ System in Atrial and Ventricular Procedures