TCT 22: FLASH Trial: US Outcomes of the FlowTriever for Pulmonary Embolism

TCT 22 - Dr Catalin Toma (University of Pittsburgh Medical Center, Pittsburgh, PA, US) joins us to discuss the findings of the FLASH Study, a real-world registry with over 1300 participants. This trial aims to analyse the safety and effectiveness of Inari's FlowTriever System for the removal of emboli from the pulmonary arteries in patients with acute pulmonary embolism.

Dr Toma presents the findings from the US Cohort, which included 300 additional patients with anticoagulation treatment in combination with the FlowTriever Device.

Questions:
1. What is the rationale behind this study?
2. Please describe the FlowTriever System
3. Please outline the study design and key findings?
4. What is the clinical impact of these findings?
5. What further research is needed, and what are the next steps?

"- My name is Catalin Toma, from the University of Pittsburgh Medical Centre. And today we'll be talking about the results of the FLASH Registry that was presented at TCT 2022.

What is the rationale behind this study?

So the rationale was to test this technology, the FlowTriever mechanical aspiration system for the treatment of PE in a large PE patient population. A broader risk compared to the original trial, which was the FLARE IDE trial, which led to the approval of this device, in the United States.

So the FlowTriever system is the first purpose-built aspiration catheter for the treatment of pulmonary embolism. It's been in use since 2015. It's been approved for PE in 2018, and essentially consists of a family of aspiration catheters that range in size from 16 to 24 French. And in addition to that, there is a number of nitinol forms that help engage and disrupt the clot, in order to perform the aspiration.

The primary findings of this study were related to the safety outcome. So the primary endpoint of this study, the composite safety event, was met in 1.8% of the patients. Of this 1.4% were bleeding events. And the other events were related to a few cases of clinical deterioration during the procedure, and one event of cardiac injury that was detected few months later. So overall, very low rate of events, very strong safety signal with this technology. In addition to that, when we looked at the secondary endpoints, one of the most important findings is the fact that we have immediate hemodynamic improvement in these patients with this technology. We do measurements of their invasive hemodynamics, the right heart cath, PA pressure, and cardiac output, PA pressure drops, cardiac artery improves. This is parallel by a drop in heart rate, improvement in respiratory status with less oxygen demands. And when we're looking long term, all this effects translate into consistent and long term improvements in the, in the clinical condition of these patients with improvement in dyspnea, improvement in their functional capacity. So overall, a very sort of positive result in that this technology has matured now. It's safe and it's effective at improving the hemodynamics of this patients acutely.

What is the clinical impact of these findings?

Now, there is solid evidence on the safety of the procedure. So, you know, when you're thinking about whether a new technology comes into play, it's always a risk to benefit ratio, right? So the adoption will increase either if the benefit is very large even if it comes at the risk or if the benefit is perhaps not yet fully defined but the risk is low. So this registry demonstrates the ladder, right? We're demonstrating that the risk of the procedure is low and the fact that there is immediate hemodynamic improvement, we truly hope that this will translates into an improvement in hard endpoints as well.

What further research is needed, and what are the next steps?

What we need to find out now is that second part of the question, right? We need to define very well, the endpoints in the clinical impact on harder endpoints of this technology. So essentially what we need is a randomised controlled trial comparing this technology to what's considered by some standard here in some of these patients, which is anticoagulation alone. This would be in the intermediate risk patient population or subclass of PEs. The group of massive PEs, which is the high risk patient population that has a much higher mortality, that will be studied separately. There's already a registry looking at that, called the FLAME registry that we're part of.” 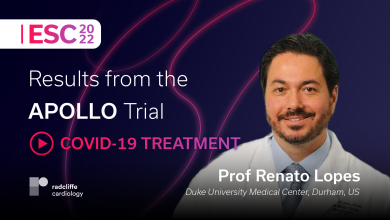