The more children a mother has, the greater her risk of heart attack, stroke and heart failure, according to research funded by the British Heart Foundation (BHF) and presented today at the British Cardiovascular Society Conference in Manchester. [1]

Researchers from the Universities of Cambridge and North Carolina studied data from over 8,000 White and African-American women from the United States, aged 45-64 years. They found that having 5 or more children is associated with a 40% increased risk of a serious heart attack in the next 30 years, compared to having just 1 or 2 children, after taking into account how long the women breastfed for.

Having 5 or more children was also associated with a 30% increased risk of heart disease – the major cause of heart attacks – as well as a 25% increased risk of stroke and a 17% increase in the risk of heart failure compared to having 1-2 children. Having 3-4 children was also associated with a modest increased risk of serious health implications, but the research found that the most significant risk increases were seen with 5 or more children. This study also suggests that the link between heart health and having children is independent of breastfeeding.

Women who had a history of pregnancy loss but no children had a 60% increased risk of heart disease and a 45% increased risk in heart failure in the following 30 years, compared to women who had 1-2 live births. This is likely to reflect underlying health problems that increase the risk of pregnancy loss as well as heart disease and heart failure.

Previous research has been inconclusive on the relationship between heart health and the number of children a woman has given birth to, with few examining multiple outcomes like heart disease and heart attacks. Breastfeeding is often thought to protect against cardiovascular disease but it has been unclear if the relationship between heart health and having children is independent of breastfeeding.

Jules Conjoice, 48 from Letterstone on the West Coast of Wales, has four children and had a heart attack on New Years’s Eve in 2016. She said:

“When I had my first heart attack, the paramedics initially told me it was a panic attack. But I’m a mother of four – I don’t panic, so I knew there was something more serious going on. Sure enough, I later found out I’d had a heart attack and it was a total shock.

“Although you might think it’s unusual for woman in their 40s to have a heart attack, I’m proof that it can happen to any of us. It’s frightening how many people have heart attacks and don’t survive.

“As a busy mother, I’m always putting my family first and looking after my health can take a back seat sometimes. I hope research like this brings it home to busy mothers and fathers that it’s important to look after themselves as much as they care for their families.”

“While it’s perhaps not surprising that having more children can mean that mums have less time to look after their own health, this research brings home just how important it is for everyone to keep an eye on their heart health, particularly busy parents.

Dr Clare Oliver-Williams who led the research at the University of Cambridge said:

“The aim of my research is not to scare women but to bring to their attention as early as possible whether they might be at increased risk of heart attacks. We know that pregnancy and childbirth put a tremendous strain on the heart, and raising children can be very stressful, too. We don’t want to add to the stress people have in their everyday lives but equip them with the knowledge to do something about it.”

“The number of children a woman has had is an easy sign of whether a woman is at greater risk. We all know it’s hard to take care of your health when you have children, but hopefully this research can help show how important it is and, perhaps, having children can provide some extra motivation.”

Find out more about the British Cardiovascular Society Conference at bcs.com/conference.

Data were from 8,583 White and African-American women, aged 45-64 years, in the Atherosclerosis Risk in Communities Study. Coronary heart disease (CHD), myocardial infarction (MI), heart failure and strokes were ascertained from 1987-2016 by annual interviews and hospital surveillance. Pregnancy and breastfeeding were self-reported. 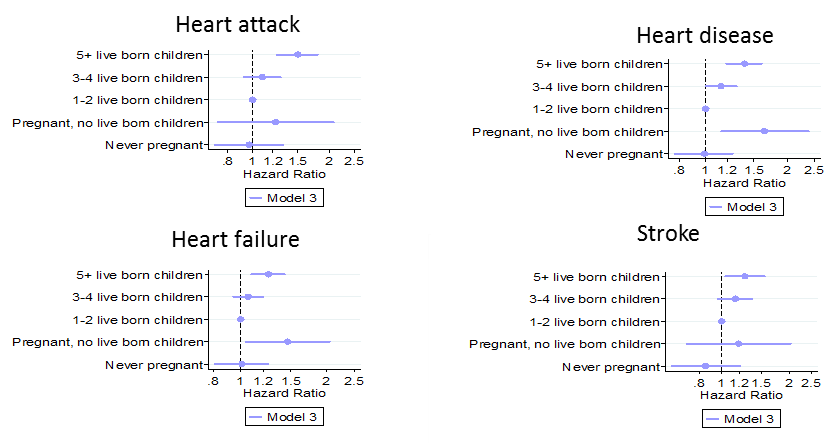 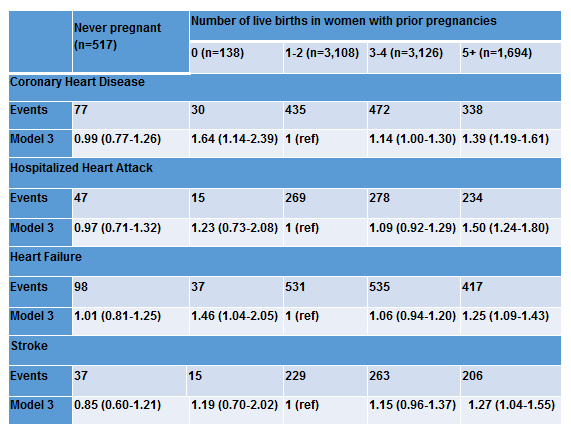 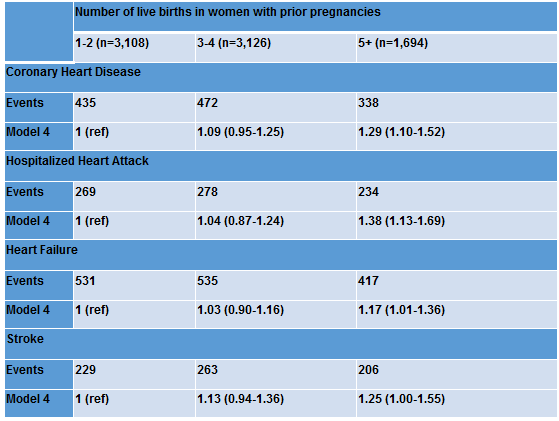 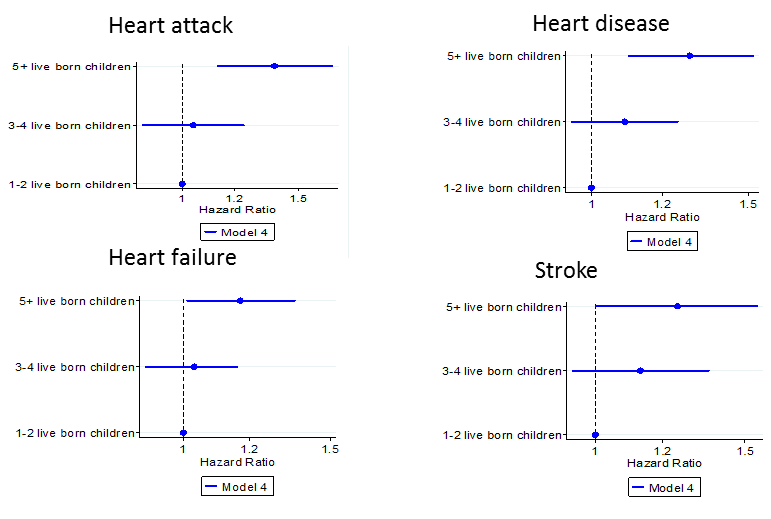