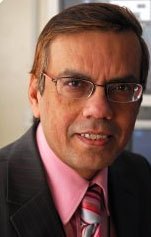 Roxy Senior is Professor of Clinical Cardiology at the National Heart and Lung Institute, Imperial College London and Consultant Cardiologist and Director of Echocardiography at the Royal Brompton Hospital, London and Northwick Park Hospital, Harrow.

He is a clinician with a major interest in echocardiography. He has been involved with echocardiography for the last 25 years and has published over 250 original papers in this field. His particular interest is in heart failure, coronary artery disease,valvular heart disease and acute coronary syndrome.

He pioneered the clinical development of myocardial contrast echocardiography especially in the detection of myocardial viability and led several multicentre studies involving Contrast Echocardiography. He also pioneered the use of stress echocardiography for early discharge of patients with suspected acute coronary syndrome. Furthermore, he has utilised hand-held echocardiography for the detection of cardiac dysfunction and assessed its cost-effectiveness in comparison to BNP for the detection of heart failure. He recently completed a study assessing cardiac function and carotid atherosclerosis in Indian Asian vs European Whites which may clarify the differential outcome in these two ethnic groups. He is now actively involved in research in valvular heart disease.

Professor Senior has been awarded the “Edler Lecture” by the University of Lund for his pioneering work in echocardiography. He provided Core – Lab function for MRC sponsored study in Hibernating Myocardium.