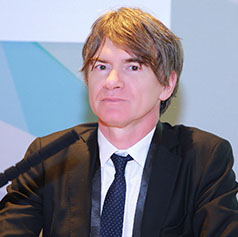 Chief of the Arrhythmia and Electrophysiology Department

Dr. Cappato began his medical training at the University of Ferrara, completing it in 1989. He was a junior physician in the Department of Cardiology of the Arcispedale Santa Anna di Ferrara, Italy, where he also completed his internship and residency. Between 1993 and 2000, he was the Co-Director of the Electrophysiology Laboratory at Eppendorf University and St. Georg General Hospital, Hamburg, Germany. Between 2000 and 2015 he was the Director of the “Clinical Arrhythmia and EP Center” of Policlinico San Donato in Milan.

Articles by Riccardo Cappato, Chief of the Arrhythmia and Electrophysiology Department

The Entirely Subcutaneous Defibrillator – A New Generation and Future Expectations

https://doi.org/10.15420/aer.2015.04.02.116
A Critical Reappraisal of the Current Clinical Indications to Cardiac Resynchronisation Therapy