The study, presented at Heart Failure 2022, investigated the efficacy and safety of vutrisiran (ALN-TTRSC02) in patients with hereditary transthyretin amyloidosis (hATTR amyloidosis).

- So, I'm Pablo Garcia-Pavia, I'm the Director of the Heart Failure and Inherited Cardiac Disease Unit at the Hospital Universitario Puerta de Hierro in Madrid, Spain. And also group leader at the National Centre of Cardiovascular Research Clinic, also in Madrid. Today, I presented the results of the cardiac exploratory analysis of the HELIOS-A. That is a phase three clinical trial of vutrisiran in patients with hereditary TTR amyloidosis with polyneuropathy.

Dr Garcia-Pavia: Vutrisiran is an RNAi therapeutic that is subcutaneously administrated once every three months, and is designed to block the production of TTR, of transthyretin, at the liver. Its mechanism of action is very similar to patisiran, another RNAi therapeutic, that is currently available because it was approved for the treatment of TTR amyloidosis, hereditary TTR amyloidosis, with polyneuropathy.
The difference, well, among other differences, vutrisiran is administered subcutaneously once every three months, and patisiran is administrated IV, once every three weeks.

Dr Garcia-Pavia: HELIOS-A was a study where 167 patients with hereditary TTR amyloidosis with polyneuropathy were randomised to receive, in a 3:1 fashion, to receive vutrisiran or patisiran. But in the trial, the vutrisiran group was compared with an external placebo arm from the APOLLO study, which is the study where patisiran was first demonstrated to be effective. This was chosen to have a group of patients not receiving any drug.
The neurological endpoints of the trial have already been communicated, which were the primary endpoint of the trial. And they were positive.
In this study that we have reported today, we have reported the data about cardiac parameters, which included NT-proBNP, the scintigraphy findings, and echocardiographic parameters. Regarding NT-proBNP, the patients on vutrisiran had a stability or reduction of NT-proBNP at 9 months and 18 months, both in the MITT cohort, or the cardiac subpopulation, compared with the patients who received placebo in the APOLLO external comparator.
Regarding an echocardiographic parameters, as well, there was a strong trend towards improvement in the patients who received vutrisiran, compared with external placebo of the APOLLO trial, both in the MITT population and in the cardiac subpopulation.
And finally, regarding scintigraphy, there was a planned cohort of vutrisiran patients in the HELIOS-A trial that had a scintigraphy test performed at the beginning of the trial, and also at the last follow-up 18 months later. While in this subgroup of people, of patients, a majority of them showed a stabilisation or reduction in the cardiac trace uptake at the end of the study.

Dr Garcia-Pavia: The key message of this study is that the patients treated with vutrisiran, improve NT-proBNP, and there was a strong trend towards improvement in echocardiographic parameters.
Moreover, regarding scintigraphy, which was for the first time studied in a randomised clinical trial, it was found that vutrisiran, a majority of patients who received vutrisiran, had a decrease in the cardiac uptake, suggesting that there was a reduction, a possible reduction in the amyloid content of their hearts.

Dr Garcia-Pavia: Well, we need to see the effect of vutrisiran in a cardiac cohort. So for that, the HELIOS-B study is currently being conducted, and in that study patients with hereditary TTR amyloidosis, and also wild type TTR amyloidosis, are currently being studied with vutrisiran. We will see at the end of that trial, that this is specifically designed for heart endpoints in a mortality, and cardiovascular hospitalizations in a cardiac population, if this therapy is effective for TTR neuropathy. 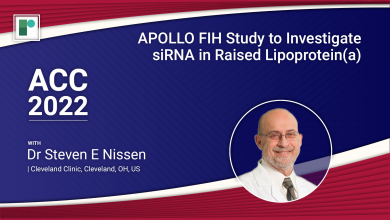 ACC 22: Magnitude & Duration of Effects of a siRNA Targeting Lp(a)

Imaging in Women with Heart Failure