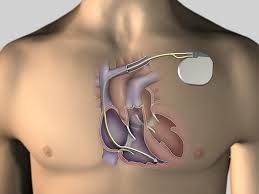 Use of implantable cardioverter-defibrillators (ICDs) programmed with long-detection intervals for ventricular arrhythmias was associated with an increase in the time to first hospitalization and reductions in hospitalization rate, length of stay and costs, compared with standard interval programming, according to a study in the August 6 issue of JAMA.

An ICD programming strategy that allows delayed detection of arrhythmias has been shown to reduce unnecessary and inappropriate therapies. Alessandro Proclemer, M.D., of the Azienda Ospedaliera Universitaria S. Maria della Misericordia, Udine, Italy, and colleagues assessed the association of programming a long-detection interval on hospitalizations, length of stay (LOS) in the hospital and costs. The researchers analyzed data from the ADVANCE III study, a trial conducted at 94 international centers between 2008 and 2010 in which 1,902 patients receiving their first ICD were randomized to a long-detection interval group (n = 948; the number of intervals to detect arrhythmias was programmed at 30 of 40) or a standard interval group (n = 954; 18 of 24 intervals).

“These favorable results for resource use complement the demonstrated clinical effectiveness of the long-detection interval strategy and come without additional costs for the hospitals or patients,” the authors write.