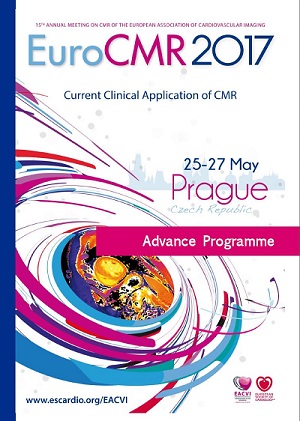 Sophia Antipolis 26 April 2017. The impact of overtraining on the heart is set to be discussed at Europe’s leading cardiovascular magnetic resonance meeting, to be held 25 to 27 May in Prague, Czech Republic, at the Clarion Congress Hotel Prague (CCHP).

EuroCMR is the largest and most important cardiovascular magnetic resonance (CMR) event in Europe. It is the annual CMR conference of the European Association of Cardiovascular Imaging (EACVI), a registered branch of the European Society of Cardiology (ESC). The scientific programme is available here

“Journalists can get the latest research findings on how athletes adapt to exercise and whether it’s good or bad for them,” said Professor James Moon, programme chair of EuroCMR. “There is a controversial suggestion that overtraining, especially if you’re over 40, is not necessarily good for your heart.”

He continued: “We will also hear from Pierre Croisille from Jean Monnet University, Saint-Étienne, France, who scanned ultramarathon runners during the Tor des Géants during their 300 km race. The marathon is a model of training and adaptation – and the ultramarathon is more extreme – it’s almost a model of dying in intensive care as your body becomes really inflamed, so we have an opportunity to understand the heart at the limits.”

EuroCMR is Europe’s leading clinical CMR meeting. More than 1 000 participants from over 60 countries are expected to attend the 2.5 day congress which is packed with state-of-the-art sessions led by international experts and new scientific research in the abstract programme.

A future of universal genetic testing followed by magnetic resonance imaging (MRI) will be outlined in a keynote lecture by Dudley Pennell from the Royal Brompton Hospital in London, UK. Professor Moon said: “The genetics will tell you what diseases you might get – for example heart muscle disease – and the MRI will show where you are in the progression, whether or not you have to change things now or even apply invasive procedures, for example electrophysiology.”

Members of the press will learn about novel MRI scanners capable of reconstructing images using Microsoft Cloud. Juliano Fernandez from Brazil will reveal how a five minute scan he is testing in 23 countries could bring MRI to less developed countries.

MRI has been contraindicated in patients with pacemakers and implantable cardioverter defibrillators (ICDs) but new research suggests that it may be safe and experts will present the current evidence. “We got this quite wrong and journalists can get the full story in a dedicated session,” said Professor Moon. “We’re moving towards a world where pacemakers are not a contraindication to MRI which is really important because everyone can get brain, spine or cancer scans they need.”

Adam Timmis from Barts Heart Centre and the National Institute for Health and Care Excellence (NICE), UK, will discuss the role of computed tomography (CT) scans for patients with chest pain, rather than MRI, echocardiography or electrocardiogram (ECG). Professor Moon said: “The UK is heading towards CT scanning first line for chest pain and the other modalities for refined diagnosis once coronary disease is present. This is a major change in direction. NICE is very credible, so the approach should be considered across Europe.”

Media representatives can get both sides of the story in a debate on when to operate in patients with valve disease. “Cardiologists replace a valve when it’s very narrow but may not think about whether or not the heart muscle is coping,” said Professor Moon. “It’s a bit like performing a liver transplant in a heavy drinker without checking liver function. In the future we will measure how the heart is responding to the diseased valve using MRI and blood tests and then decide whether or not surgery is needed.”

3D printing is a hot topic and journalists can have a close look at how imaging and printing the heart and vessels is helping plan operations for our sickest children and adults at Great Ormond Street Hospital, London and elsewhere. Graham Cole from Imperial College London will show where doctors got it wrong in imaging and how to avoid mistakes as researchers develop new treatments for the future.

Professor Moon said: “MRI has transformed neurology and our understanding of the body. It’s taken us longer in cardiology because the heart moves constantly. We have sorted those problems out and we are able to diagnose patients with cardiovascular disease earlier, tailor the treatment to the individual, and measure the effect of that treatment. Members of the press should register now for this exciting event.”