At least 15 % of all patients who require percutaneous intervention (PCI) have a high bleeding risk (HBR). In populations comprising only patients with acute coronary syndromes (ACS), the HBR can exceed 40 %.1 Patients with HBR also have an increased risk of ischaemic events.2 Therefore, HBR patients represent a population with an overall high risk of adverse clinical outcomes. Most patients who require PCI, including patients with HBR, are currently treated with metallic drug-eluting stents (DES). Biodegradable polymer-coated metallic DES (BP-DES) were developed to overcome vessel wall inflammation and delayed vessel healing, related to the permanent presence of polymers on durable polymer-coated metallic DES (DP-DES) in the coronary artery.3 While no clear benefit of contemporary BP-DES over DP-DES has been demonstrated,4,5 there might be an advantage in high-risk populations such as HBR patients. Nevertheless, it is unclear whether potential advantages of BP-DES may be seen as early as at 1-year follow-up.5

Dr von Birgelen presented data from the randomised, prospective multicentre BIO-RESORT trial, which aimed to evaluate the 1-year safety and efficacy of treatment with contemporary very thin-strut BP-DES compared with thin-strut DP-DES in patients with HBR who require PCI. Patients were classified at HBR if they met the following criteria: age ≥ 75 years; current use of oral anticoagulation therapy; anaemia; thrombocytopenia; gastro-intestinal bleeding within the last 12 months; stroke within the last 12 months; previous intracranial haemorrhage; severe renal insufficiency and current use of non-steroidal anti-inflammatory drug (NSAIDs), which was consistent with previous trials.1 According to these criteria, almost 29 % of the 3,514 allcomers patients in the study had HBR. Participants were randomised (1:1:1) to receive a Synergy® (Boston Scientific) everolimus-eluting stent (BP-DES), Orsiro sirolimus-eluting stent (BP-DES), or Resolute™ Integrity (Medtronic Inc.) zotarolimus-eluting stent (DP-DES). The primary endpoint was a composite of safety (cardiac death or target vessel-related myocardial infarction) and efficacy (target vessel revascularisation) at 12 months. Results showed that both BP-DES (eluting either everolimus or sirolimus) were non-inferior to the DP-DES (eluting zotarolimus) in treating allcomers with a high proportion of patients with ACS (6.5 % of patients treated with BP-DES [pooled two devices] experienced TVF compared to 7.3 % of patients treated with DP-DES).6 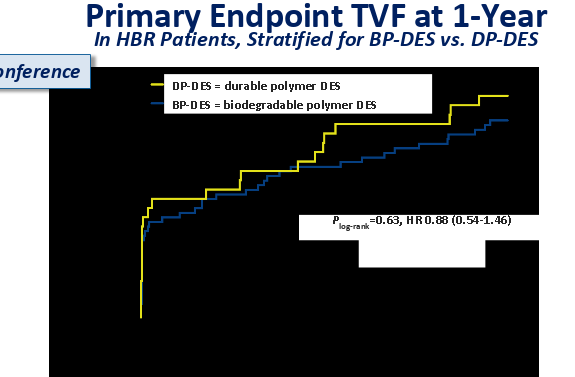 Long-term follow up of this high-risk patient group is required to assess the long-term benefits (if any) of BP-DES over DP-DES. While the study was limited by low overall event rates, these data provide an interesting reference to compare the findings of future and ongoing stent studies in patients with HBR and in patients treated with short term dual antiplatelet therapy.