Professor Camm began by stating that whenever asked about NOACs, the matter of reversibility is always mentioned, because anticoagulant drugs may cause serious haemorrhage. At present, the management of bleeding can be largely managed by standard procedures such as pressure on the bleeding point, and in cases of major bleeding, replacement of blood volume, etc. (see Figure 2). However, reversal strategies may be needed in cases of life-threatening bleeding or if the action of the drug is long and needs to be antagonised in emergency situations.26 It should be remembered that the half-life of these drugs is relatively short (around 12 hours) and the anticoagulant effect of the drug will diminish much more quickly than that of warfarin, which often requires much more active intervention. While specific antidotes would be desirable, the major clinical trials of NOACs took place without the availability of antidotes.

Specific reversal agents for NOACs are currently under clinical investigation. These include andexanet alfa (Portola Pharmaceuticals) administered alone or with factor Xa (fXa) inhibitors, (phase II completed27,28 and phase III trials recruiting),29,30 idarucizumab, (Boehringer Ingelheim) administered alone or with dabigatran (phase I competed31 and phase III recruiting)32 and PER977 (aripazine, Perosphere Inc.) administered alone or with edoxaban (phase I study completed).33 Andexanet alfa is a modified, recombinant human fXa molecule that is catalytically inactive but retains high-affinity binding to direct fXa inhibitors and is a universal factor Xa inhibitor reversal agent. Phase II studies in healthy volunteers have provided rapid, sustained and dose-related reversal of apixaban and rivaroxaban.28 Idarucizumab is a fully humanised monoclonal antibody fragment (FAb) against dabigatran.34 In vitro characterisation and PK analyses showed that the Fab has very tight binding affinity to dabigatran, with rapid onset and slow offset.35 Idarucizumab had no effect on bleeding in rats receiving VKA. 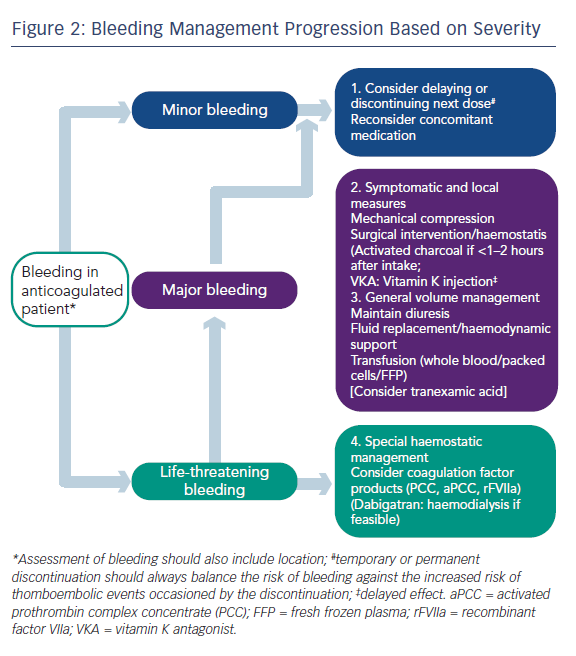 The phase III trial will evaluate the reversal of dabigatran by intravenous administration of idarucizumab in patients who have uncontrolled bleeding or require emergency surgery or procedures.32 Aripazine is a small synthetic molecule with activity against all NOACs and is in early stage clinical development.33

In the panel discussion, Professor Verheugt mentioned first that the NOACs – for which there is no antidote as yet – showed in their trials a reduction in fatal bleeding. He stated that it is important that reversibility agents are effective in bleeding situations – while warfarin can be reversed, this does not stop the bleeding – and it is difficult to conduct clinical trials on bleeding patients. It was also pointed out by Prof Kirchhoff that in a comparison between apixaban and aspirin, the rate of major bleeds was the same despite presumably equal plasma coagulation in the aspirin group.5 He also stated that we [doctors] want to have control about the harm we cause ourselves. Prevention of bleeding is easier than cure. The antidote will not stop the accident and haemostasis will still be required. Availability of antidotes is, however, a serious concern and the availability of an antidote may make NOACs more acceptable to patients and general practitioners, according to Professor Le Heuzey.

The consensus of the panel was that transferring knowledge to patients and the lay press is more important than the availability of an antidote. The panellists would like to have an inexpensive antidote for patient reassurance, even if in clinical practice it might not be much needed, but it should have a long shelf life as it would be used infrequently. Prevention of bleeding is more important than using an antidote, and the short half-lives of NOACs ensures a relatively low rate of major bleeding episodes.