The use of NOACs with dual antiplatelet therapy (DAPT) presents a therapeutic dilemma. There is uncertainty over the optimal antithrombotic management strategy for patients with AF presenting with an acute coronary syndrome and/or undergoing percutaneous coronary intervention (PCI)/stenting.36 Professor De Caterina showed that 8–10 % of AF patients of cardiology departments develop ACS or need elective stent implantation and 15–20 % of post ACS or electively stented patients develop AF and are therefore candidates for anticoagulation.36 The use of DAPT in patients with AF after coronary stenting is essential to prevent stent thrombosis and is supported by a large body of clinical trial data; however, the use of NOACs is needed to reduce the risk of stroke, and this therapeutic entity has been well-evaluated in many trials.

When used together, these therapies confer a major bleeding risk. In a Danish cohort study using national registries to identify over 82,000 patients with AF during the period 1997 to 2006 taking post-hospital therapy of warfarin, aspirin, clopidogrel and combinations of these drugs, 11.4 % developed a nonfatal or fatal bleeding over a mean 3.3 years’ follow-up, with those on triple therapy having an incidence rate of 10–13 % per patient year.37 It is therefore vital to establish an equilibrium between the risk of thrombosis (stent thrombosis and stroke) and the risk of bleeding. The ESC guidelines have stratified patients into low- and high-risk groups to minimise the time of overlap of drugs. The time of triple therapy should be as short as possible; a maximum of 1 month is recommended for the combined use of aspirin and clopidogrel, on the background of a vitamin K antagonist (VKA), with elective stenting with bare-metal stents (BMS). With drug-eluting stents (DES) in the setting of elective PCI, a maximum of 6 months and, for more recent stents, 3 months is suggested, then continuing with one single antiplatelet agent and the VKA. In the case of ACS a triple therapy overlap is advised for 6 months. The overlap should, however, be shorter in patients at high bleeding risk, in whom BMS are recommended anyhow, and in such cases the continuation of antithrombotic therapy with a VKA only is recommended after the first month. In case of patients at high bleeding risk having received stenting (usually BMS) because of an ACS, triple therapy is still restricted to 1 month, but continuing a VKA with the addition of one antiplatelet agent (clopidogrel or aspirin) up to 1 year (see Figure 3).38 A consensus document of the AHA is more complex and was not discussed here.39 However, these guidelines only cover triple therapy involving VKAs; triple therapy involving NOACs is still under investigation. 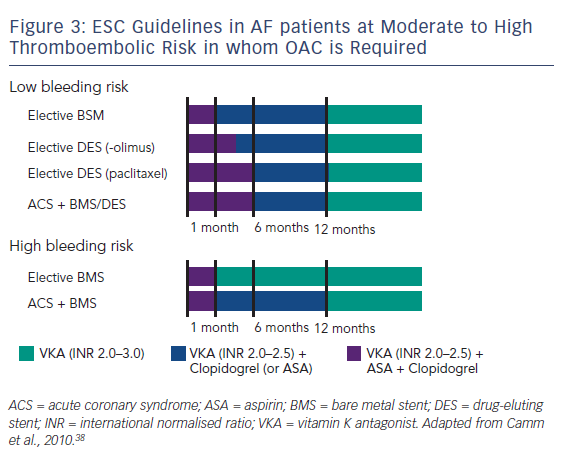 Several trials are ongoing in patients with AF and ACS and/or coronary stents. The PIONEER trial (a study exploring two strategies of rivaroxaban – 15 mg once daily + clopidogrel; 2.5 mg twice daily + DAPT for the initial 1, 6 or 12 months – versus the ‘classic’ triple therapy with a VKA + aspirin + clopidogrel in patients with AF who undergo a PCI),40 will enrol 21,000 participants. The RE-DUAL-PCI (Evaluation of Dual Therapy With Dabigatran vs Triple Therapy With Warfarin in Patients With AF That Undergo a PCI With Stenting) trial will evaluate dabigatran (110 mg twice daily) + a single APT, dabigatran 150 mg twice daily + single APT and warfarin and DAPT.41 All these trials have limitations in that more than one component of the comparator ‘cocktail’ – a VKA + aspirin + clopidogrel – is being changed at a time, and the final interpretation of the data may prove difficult.

A panel discussion ensued about the need to use aspirin post-PCI. The panellists agreed that there was an excess co-prescription of these drugs and that it may be safe to use single APT with NOACs. Clopidogrel is preferred unless there is a definite stent thrombosis, according to Professor Kirchhof, in his institution, as newer agents have not been tested in patients who are anticoagulated. Patients in the RE-LY trial underwent stenting and, while bleeding rates increased, there was no difference in outcomes between warfarin and dabigatran. When performing interventions in anticoagulated patients presenting with ACS, every possible effort should be taken to prevent bleeding, e.g. a radial rather than femoral approach. The new bio-absorbable stents should minimise the need for long-term triple therapy. In conclusion, the addition of NOACs to APT may help prevent ischaemic events and stent thrombosis, but this needs testing in a clinical trial setting. It is important to balance the antithrombotic and anticoagulant effect of the different agents, but more clinical trial data are needed.