Transcatheter aortic valve implantation (TAVI) has become the treatment of choice for patients with severe symptomatic aortic stenosis (AS). It is less invasive than surgical aortic valve replacement (SAVR), non-inferior to SAVR in terms of all-cause mortality at 2 years for patients at high and intermediate surgical risk. Its application in younger patients and those at lower surgical risk is now being explored. However, thrombotic and haemorrhagic complications following TAVI remain high and are a major cause of post-procedure mortality, necessitating antithrombotic therapy.2 In addition, the guideline recommendations for antithrombotic therapy for patients with AS undergoing TAVI are not standardised and not supported by randomised controlled trial data.1,3

The Assessment of Platelet reactivity after TAVI (REAC TAVI) trial was a prospective, multicentre, randomised open label parallel group study whose primary objective is to evaluate the effectiveness of ticagrelor compared with clopidogrel for the suppression of residual platelet reactivity after TAVI. Its efficacy endpoint was the suppression of residual platelet reactivity in ≤70 % of patients treated with ticagrelor. Inclusion criteria were degenerative severe AS accepted for TAVI by transfemoral, subclavian or axillary access. The main exclusion criteria were use of chronic oral anticoagulants (OAC) or patients for whom dual (DAPT) or single antiplatelet therapy (SAPT) for 3 months was contraindicated due to a new post-TAVI medical indication. Of 65 patients undergoing TAVI under clopidogrel and aspirin, all were assessed with the VerifyNow system aspirin and P2Y12 assays before TAVI. 19 patients (29 %) had normal platelet reactivity (P2Y12 Reaction Units [PRU] <208) and did not undergo treatment modification. The remaining 46 patients were randomised to standard treatment with DAPT (clopidogrel 75 mg + aspirin 100 mg, 24 patients) or ticagrelor (90 mg twice daily + aspirinA initiated 24 hours before TAVI, 22 patients). 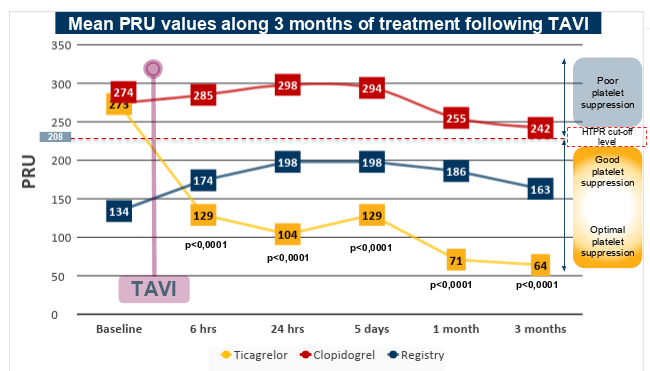 In summary, clopidogrel does not achieve adequate platelet inhibition before and after TAVI in most patients. By contract, ticagrelor is effective for the suppression of high platelet reactivity after TAVI with its effect maintained over 3 months following TAVI. This study was limited by its small sample size and short follow-up, but has demonstrated that a large randomised trial powered for clinical endpoints is needed.