The Istituto Clinico Sant’Ambrogio started its Trans Aortic Valve Implantation (TAVI) programme in 2008 and has since performed more than 450 cases.

The percutaneous femoral approach is the preferred access as it is the least invasive and often requires only mild or local sedation. Nevertheless, our institution has performed several cases by the subclavian and transaortic routes. About one-third of the population referred for TAVI has peripheral artery disease, which has also been associated with a higher risk of complications, most notably major vascular access complications, which are a predictor of poor short-term outcomes.1

The progressive reduction of the TAVI delivery system profiles along with the introduction of the SoloPathTM re-collapsible balloon access system have increased the procedural success rate, reduced the rate of vascular complications and allowed more patients to be treated percutaneously via the femoral access.2 The SoloPath re-collapsible system has an inner diameter of 19 F and is compatible with most of the TAVI prostheses. The PorticoTM transcatheter valve system is highly compatible with this sheath.

The Iliac-femoral axes were extremely tortuous and calcified with small diameters. In such conditions, the passage of devices can cause dissections, perforations or even avulsion of the vessel, thus making navigation with the aortic prosthesis impossible. The combination of the SoloPath re-collapsible system and the Portico aortic prosthesis made the procedure possible.

The CT scan evaluation was crucial to plan the TAVI procedure, not only to choose the size and type of the prosthesis, but also to assess the iliac-femoral in terms of caliper, possible stenosis, calcifications and tortuosity.

The high prevalence of severe peripheral arterial disease, present in more than one-third of cases, increases the risk of vascular complications that when severe, are predictors of a worse prognosis.1

According to these conditions, it becomes essential to use a femoral access sheath that allows: 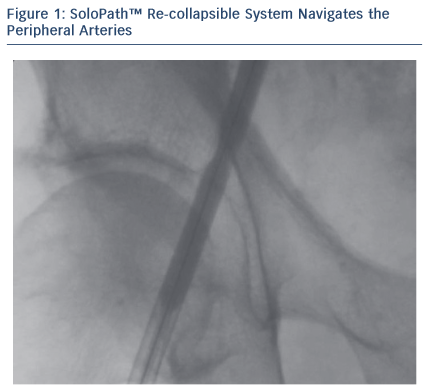 The patient’s Iliac-femoral axes were extremely tortuous and calcified with small diameters (4.5 mm). Thanks to its technical features, the SoloPath re-collapsible system navigated the vessel smoothly. Once inserted in the vessel, the expander balloon (dilator) was inflated up to 20 atm, expanding the co-axial sheath up to a predictable large operating profile. The expander was then deflated and removed, leaving the sheath expanded with an outer diameter of 23 F and an inner diameter of 19 F.

When the sheath was inflated from 13.5 F (outer diameter) up to 23 F, the vessel wall was dilated with the same mechanism of peripheral angioplasty. It had a low profile tip to minimise insertion force and a folded pre-insertion profile designed to minimise access trauma. The malleable shaft gave precise trackability and the hydrophilic coating reduced surface friction.

The 23 mm Portico transcatheter valve system has a low profile of 18 F (valve within the distal protective sheath) with a 13 F shaft. This low profile made the Portico valve highly compatible with the SoloPath re-collapsible system. The combined use of these two devices was a winning choice in this difficult case.

The preparing process of the PorticoTM valve is 'single operator', and loading is simplified without ice. There is only one rinse required for a total rinse time of 20 seconds. The system includes only three components: the valve, delivery system and loading system. These technical features make the Portico valve loading easy and ‘user friendly’ and the process is very quick.

Through its low profile and malleable shaft, the Portico system had good navigability inside the SoloPathTM re-collapsible system and through the vasculature, thus minimising the risk of damage in tortuous anatomies. In addition, the Portico valve is fully recapturable and repositionable at the implant site, which can be beneficial for positioning, especially in complex patients. In this particular case, resheathing was not performed as the final valve position was quite good and no paravalvular leak (PVL) was observed. 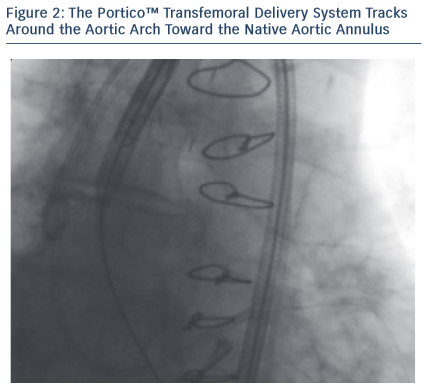 Throughout the deployment, the Portico valve was stable and its release was very controlled. What is more interesting is the smooth and progressive response of the valve in the opening phase.

Once the valve was placed and the procedure was over, the SoloPath re-collapsible system was deflated, using the ‘collapsible port’. The outer diameter was reduced by 30 % to about 16 F, and the hydrophilic coating minimised withdrawal resistance force, reducing potential risk of avulsion.

The final result was assessed with angiography, invasive pressure and echocardiogram. No PVL was observed. The transaortic peak gradient was mild (16 mmHg). At discharge, patient was fine. At the 30-day follow-up, the NYHA Class was II, and the echocardiogram confirmed the good performance of the Portico valve. 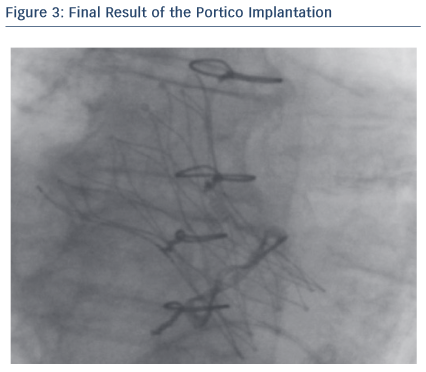 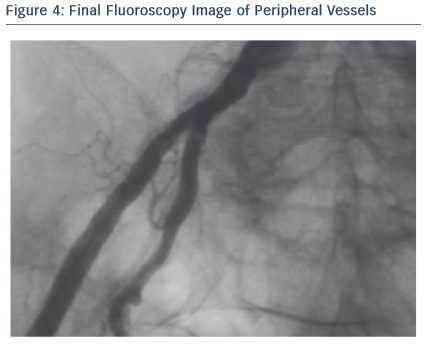 In patients with an indication for TAVI, aorta and iliac-femoral disease has a considerable prevalence. The CT scan evaluation is crucial in order to choose the best access and identify the presence of stenosis, calcifications and tortuosities.

The risk of vascular complications can be minimised by properly designed devices. In this case, the Portico valve was implanted without any issue despite the iliac–femoral axis tortuosity. The unique technical features of the SoloPath re-collapsible balloon access system, together with the low profile and controlled handling of the Portico valve, contributed to the success of the procedure, proving the effectiveness of this device duo.

Brief Summary: Prior to using these devices, please review the Instructions for Use for a complete listing of indications, contraindications, warnings, precautions, potential adverse events and directions for use.