Popliteal artery aneurysms representing 80% of peripheral artery aneurysms rarely rupture (a reported incidence of 0.1–2.8 %) and second co mmonest in frequency after aorto-iliac aneurysms. They usually present with pain, swelling, occlusio n or distal embolisation and can cause diagnostic difficulties. We repo rt a 78 year old man who was previously admitted to hospit al with a pulmonary embolus secondary to deep venous thrombosis. He was heparinized then warfarinised and was readmitted with a ruptured popliteal aneurysm lead ing to a large pseudo aneurysm formation. The pulmonary embolus had been due to popliteal ve in thrombosis and propagation of the clot. A thorough review of literature id entified only one previously repo rted case of ruptured popliteal artery aneurysm and subsequent large pseudo an eurysm formation. We feel it is important to exclude a popliteal aneurysm in a patient with D VT. This may be more common than the published literature suggests.

Citation
World Journal of Emergency Surgery 2007, 2 :34
DOI
https://doi.org/10.1186/1749-7922-2-34
Acknowledgement
Written consent was obtained from the patient or their relative for publi- cation of this case report and any ac companying images. A copy of the writ- ten consent is available for review of Editor-in-Chief of this journal.

A 78 year old Caucasian male presented to our casualty 6 weeks following admission elsewhere with a history of swelling of the right leg and a pulmonary embolus. He had undergone VQ scanning with a proven diagnosis of pulmonary embolus and was therefore anticoagulated with heparin and warfarin.

On admission he had swelling of the right knee and lower thigh with loss of sensation on the dorsolateral aspect of the right foot. Clinical examination revealed a large mass in the right popliteal fossa. The initial diagnosis was that of deep venous thrombosis and imaging was undertaken and the patient referred for a vascular opinion.

On vascular review, the patient had a pulsatile mass com- parable with a popliteal artery aneurysm of 12 cms diam- eter on the right and 6 cms on the left. His foot was warm and well perfused and his INR was 2.6. He underwent a duplex scan of the lower limb arteries which revealed ectatic iliacs and an abdominal aorta of 3.4 cms in diam- eter. A further CT arteriogram (fig 1, 2) confirmed that in fact the swelling on the right side was indeed a pseudo aneurysm following rupture with peripheral calcification. 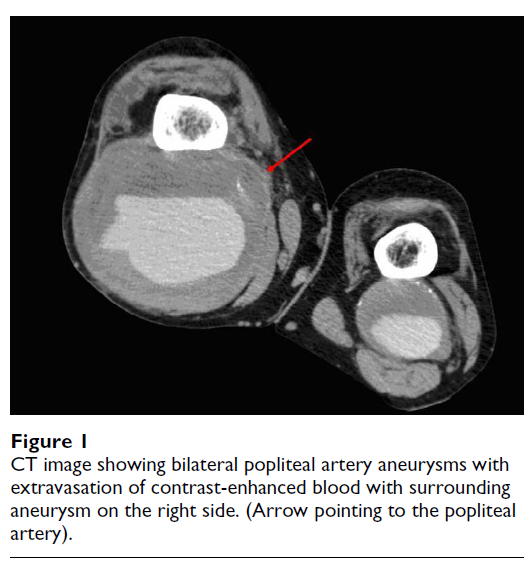 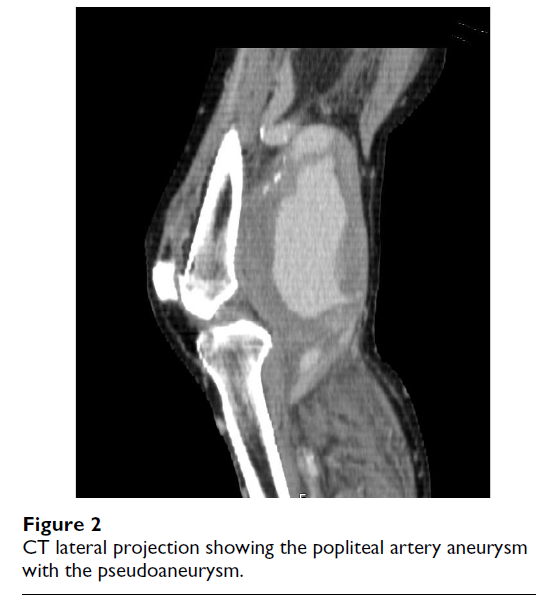 The dilemma was therefore a patient with an established pulmonary embolus and a friable clot in the iliac veins, anticoagulation and the treatment of the ruptured aneu-rysm. Due to lack of expertise we elected to continue with full anticoagulation rather than place an inferior vena caval filter. Operative exploration was performed through a medial approach under full anticoagulation and the right popliteal artery was found to contain a large volume of blood pointing laterally. The popliteal aneurysm was excluded. Duplex examination of the upper and lower limb veins revealed that the veins were of small diameter therefore revascularization of the leg was established by an inlay 8 mm PTFE graft. Due to continuous oozing, the aneurysm sac was packed and the end of the pack brought out laterally. The pack was removed at 48 hours under sedation. The patient made an uneventful recovery. Six weeks later he underwent repair of the left popliteal aneu- rysm.

Popliteal aneurysms are generally associated with poor prognosis. Death and limb loss have both been reported, and approximately 1% of the patients will be left with residual symptoms [3] Though popliteal artery is the most common site of aneurysm formation after the aortoiliac system, the reported incidences of popliteal artery rupture is very low (0.1–2.8 %) [4]. The possible reasons for such a low rupture rate could due to the fact that the popliteal artery is surrounded by musculofascial and bony struc- tures offering resistance and protection.

The clinical presentation of ruptured popliteal aneurysms varies widely. The characteristic presentation is said to be a swelling behind the knee associated with acute pain. They can also present as painless progressive enlargement of the leg, swollen leg with anaemia or with deep vein thrombosis (DVT) [5]. Deep venous thrombosis is usually due to venous compression, and very rarely can result in thromboembolic phenomenon as was evident in our case. In our case the right popliteal artery aneurysm ruptured resulting in a haematoma, which was limited by the sur- rounding tissues. It was starting to point laterally but cul- tures of the blood were negative. Local venous stasis and compressive effects resulted in deep venous thrombosis of the popliteal veins, which resulted in the pulmonary embolus.

Ultrasound examination is of limited value in a case of suspected rupture; however it does help in confirming the presence of an aneurysm. CT scan with or without angiog- raphy is the investigation of choice to confirm popliteal artery rupture [6]. It can clearly demonstrate the presence of the aneurysm and the associated haematoma making the diagnosis obvious. Angiography is helpful to identify distal runoff and the site for distal anastomosis.

It is stated that ruptured popliteal artery aneurysms are best treated by ligation and continuity established prefer- ably by autologous saphenous vein graft or by synthetic grafts when the patients have unsuitable veins. More recently this condition has been managed by percutane- ous endovascular treatment in medically unfit patients [7].

Since there is no evidence to show that routine screening of popliteal arteries will detect asymptomatic aneurysms [8] and in addition the pick up rate is low, the majority of the patients with popliteal artery aneurysms present with limb threatening complications including thrombosis and distal embolisation. Venous occlusion has been doc- umented [9] but our case shows that DVT and PE is another poorly documented presentation. A high index of suspicion is needed in a patient presenting with signs and symptoms of deep vein thrombosis or a massively swollen leg with impending compartment syndrome or anaemia with out any clear diagnosis. Inappropriate management of patients with deep venous thrombosis from unrecog- nised arterial aneurysms is associated with unacceptable morbidity and mortality.