Nitinol is a shape memory alloy composed of near equal parts of nickel and titanium. Nitinol exhibits two unique properties: superelasticity and shape memory. Superelasticity refers to the ability of Nitinol to accommodate large recoverable strains within a given temperature range. Shape memory refers to the ability of Nitinol to deform at a given temperature and recover to its original shape upon heating above its transformation temperature (or austenite finish [Af] temperature). These unique properties of Nitinol, along with its biocompatibility, make it an attractive option for self-expanding stents used in transcatheter aortic valve implantation (TAVI) procedures.

The performance of a Nitinol self-expanding stent is impacted by the raw material, stent design and stent processing. Optimisation of all three aspects is needed to achieve clinically relevant stent performance parameters, including acceptable Af temperature, radial forces, flexibility and long-term fatigue performance.

The St. Jude Medical™ Portico™ transcatheter valve is made from superelastic Nitinol tubing. The Nitinol material, unique stent design and proprietary manufacturing processes of the Portico valve provide specific stent properties that allow the valve to be fully resheathed and recaptured* during the TAVI procedure, if necessary, and also enable the valve to be efficiently prepped and loaded at room temperature.

The unique properties of Nitinol – superelasticity and shape memory – are derived from its ability to undergo reversible phase transformation. Upon the application of temperature or stress or a combination of both, Nitinol undergoes phase transformation between austenite and martensite (see Figure 1).

Austenite – The “parent” phase of Nitinol that is stable at high temperatures.

Martensite – The “daughter” phase of Nitinol, obtained at low temperatures or high strains. Martensitic Nitinol is highly malleable when compared to austenite.

Superelasticity When Nitinol phase transformation is driven by external stress or force above its transformation temperature, it is called superelasticity. The application of an external load transforms Nitinol from austenite to martensite. Upon release of the load, martensite transforms back to its original parent or austenite phase. Nitinol can accommodate strains as high as 10 % in certain cases and still revert back to its original shape after the removal of the load. In comparison, commonly used medical device metals/alloys (e.g., stainless steel) can generally accommodate elastic strain levels < 2 percent.

Superelasticity in Nitinol is characterised by a difference in the loading and the unloading curve during the application of a force or load. This is termed “biased” stiffness, where the Nitinol forces are dependent on whether the material is loading or unloading. For example, when Nitinol stents are loaded into the delivery system, the stent undergoes phase transformation from austenite to martensite along the loading part of the curve (see Figure 2). Upon deployment in the body, stent expansion occurs along the unloading part of the curve as martensite converts back to the austenite phase. 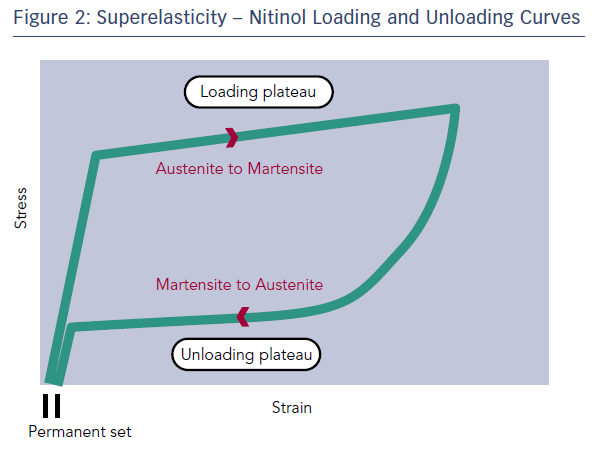 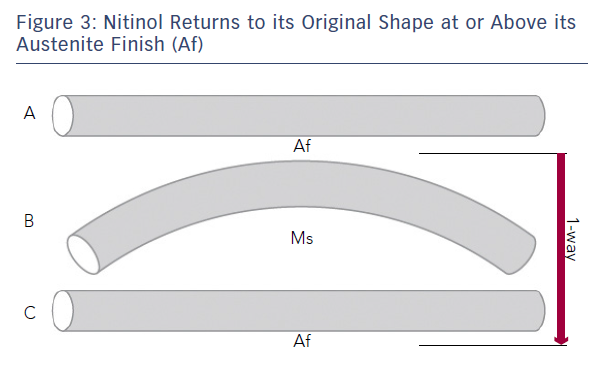 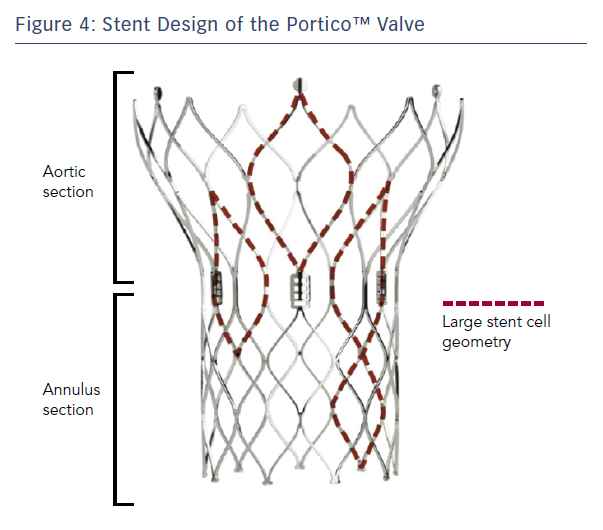 As a consequence of “biased” stiffness, the stent radial force that interacts with the anatomy is along the unloading plateau where the radial forces would be lower in comparison to the loading plateau at the same diameter. This property is utilised in the Portico valve design and manufacturing to enable resheathability on one side while allowing for acceptable anchoring and sealing of the valve on the other.

Nitinol Properties Of The Portico™ Valve

The stent of the Portico™ valve is designed using superelastic Nitinol tubing. The stent design and the manufacturing process are controlled to achieve a balance between key performance parameters. The Af temperature of the stent is set below body temperature to ensure that the valve fully opens to the annulus diameter on deployment and has sufficient radial force to seal and anchor. In addition, the stent radial force during compression is optimised to allow valve prep and loading at room temperature, and full resheathability at body temperature. The design exploits the biased stiffness properties of Nitinol to ensure sufficient chronic outward radial forces for sealing and apposition of the valve in its intended use range within the annulus. This is in contrast with first generation TAVI self-expanding stent technologies that require cold temperatures to manipulate the Nitinol for valve loading.

The open cell stent design of the Portico valve has two primary sections: the annulus and the aortic. The intended functions of the two sections are noted below.

Annulus Section – higher cell density and provides support for the valve. It has higher radial force for optimal anchoring, apposition and sealing.

This stent design and its proprietary manufacturing process also optimise the stent’s radial forces. The two components of stent radial force – radial resistive force (RRF) and chronic outward radial force (COF) – are both augmented for performance. The RRF is optimised to allow for room temperature loading of the Portico valve and resheathability at body temperature. Additionally, the COF is enhanced to ensure optimal valve anchoring and apposition within the native annulus.

Published engineering testing has also shown that this results in a very uniform force over the indicated use range for each valve size, which can promote better apposition, anchoring and sealing.1

In addition, extensive preclinical studies and anatomical analysis have been performed to ensure optimal valve functionality and stent performance. CT scans from representative TAVI patients (n = 52) were used to quantify deformation modes in the aortic anatomy and anatomical assessment of patient anatomies (pre- and post-Portico valve implant) were conducted to test for acceptable valve durability, stent fatigue and apposition (Figure 5).2 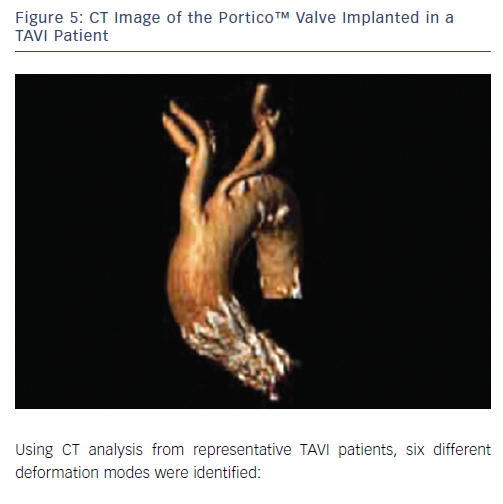 The deformation is driven by cardiac motion between systole and diastole. The measured distensions are comparable to available literature data. Thirty samples were successfully tested at or beyond these strain levels for stent durability to 600 million cycles (15-year equivalent life).

The Portico™ valve has a uniquely designed Nitinol stent that utilises proprietary manufacturing techniques to augment its “superelastic” characteristics – enabling the valve to be fully resheathed, repositioned and recaptured* in situ. In addition, the stent frame of the Portico valve features an open cell geometry with two primary sections – the aortic and annulus sections – with radial forces that allow for anchoring and apposition within the native annulus.

Kristopher Vietmeier has more than 19 years of experience in Nitinol technologies and product development using Nitinol materials. He is a lead engineer in the design and development of the Portico transcatheter valve at St. Jude Medical. He has a Bachelor of Science in Mechanical Engineering from the University of Minnesota, Twin Cities.