Percutaneous coronary intervention of small-vessel coronary artery disease (SVD) remains challenging due to difficulties with device delivery and high restenosis rate, even with the use of newer-generation drug-eluting stents. Drug-coated balloons represent an attractive emerging percutaneous coronary intervention option in patients with SVD. Potential advantages of drug-coated balloons in SVD include enhanced deliverability because of their small profile, avoidance of foreign-body implantation, and shorter duration of dual antiplatelet therapy.

SVD was defined in the Intracoronary Stenting or Angioplasty for Restenosis Reduction in Small Arteries (ISAR-SMART) trial as coronary lesions in a vessel with a reference diameter (RVD) of <2.8 mm.1 In current practice, the term “very small-vessel coronary artery disease“ (CAD) is often used when the RVD is 2.0–2.25 mm.2,3 Approximately 40–50% of coronary lesions occur in small vessels,4 and 30–50% of coronary interventions are performed for SVD lesions.5 SVD is commonly associated with female sex, old age, diabetes, peripheral arterial disease (PAD), and long lesion length.6,7

PCI in patients with SVD can be challenging because of higher risk for procedural complications, such as dissection and perforation, as well as long-term major adverse cardiac events (MACE).4,8,9,10,11 Historically, the use of balloon angioplasty (BA) in SVD has been associated with high restenosis rates due to elastic recoil and negative remodeling.12 In the ISAR-SMART trial, bare metal stents (BMS) were not superior to BA in 404 patients with SVD.1 A large meta-analysis published in 2005, however, which included 4,383 patients with SVD, demonstrated lower incidence of repeat revascularization with BMS over BA – 14.9% versus 18.7%, OR 0.76 (95% CI [0.61–0.95]) p=0.02 – with no difference in MI (1.3% versus 1.7%, p=0.18) or mortality (3.1% versus 4.2%, p=0.42).13 However, BMS remained associated with unacceptable rates of repeat revascularization and MACE at 14.9% and 17.6% respectively.13

Drug-eluting stents (DES) were developed aiming to reduce the risk of in-stent restenosis (ISR) compared with BMS.14,15 DES were superior to BMS in SVD in multiple studies.16–18 The risk of ISR with first-generation DES (paclitaxel-eluting stents [PES] and sirolimus-eluting stents [SES]) in SVD, however, remained high.19,20 This higher rate of restenosis with first-generation DES was attributed to sustained drug release and the inflammatory effect of the polymer, causing delayed healing, and paradoxical vasoconstriction with exercise in the stented segments.21–26 Moreover, the use of DES in SVD was associated with a higher risk of stent thrombosis.25,27–29

The BAsel Stent Kosten Effektivitäts Trial (BASKET-SMALL) pilot study randomized 191 patients with SVD to first-generation PES (Taxus Liberté®, Boston Scientific; 91 patients) or a second-generation ZES (Endeavor Sprint®, Medtronic; 100 patients). The incidence of target vessel revascularization (TVR) at 1 year was 6.6% versus 2% for PES and ZES, respectively.39 In a retrospective study of 1,132 patients with SVD (RVD <2.5 mm) who received either a BES (NOBORI®, Terumo; 612 patients) or a cobalt chromium EES (XIENCE V; 520 patients), the incidence of TLR at 2 years was 8.3% versus 8.4% for BES and EES, respectively (p=1.0).40

The first trial in humans to study the use of DCBs in peripheral arterial disease lesions was the Local Taxane with Short Exposure for Reduction of Restenosis in Distal Arteries (THUNDER) trial, published in 2008. THUNDER randomized 154 patients with femoropopliteal lesions to angioplasty with paclitaxel versus no paclitaxel and demonstrated that DCB was associated with significantly lower late lumen loss and lower risk of TLR.41 Multiple subsequent studies have shown that DCBs are associated with superior outcomes compared with uncoated BA in femoropopliteal lesions.42

For the treatment of obstructive CAD, DCBs were first considered in 2003 as a potential treatment for ISR after BMS and DES in the Treatment of in-Stent Restenosis by Paclitaxel Coated PTCA Balloons (PACCOCATH–ISR I) trial, which enrolled 52 patients. The study showed significantly lower 6-month late lumen loss compared with uncoated BA.43 Multiple subsequent studies confirmed the effectiveness of DCBs in reducing angiographic late lumen loss in ISR lesions.44–46 Drug-coated balloons were further studied in de novo coronary lesions including bifurcation lesions.47–51

DCBs are semicompliant balloons coated with a highly lipophilic, antiproliferative drug. The most commonly used drug currently is paclitaxel; some newer DCBs use sirolimus.52,53 The drug is delivered to the vessel wall with mechanical balloon expansion, usually for 30–60 seconds, after proper preparation of the vessel.50 The half-life of the drug in the tissue is approximately 2 months, depending on balloon type, coating technique, excipient used, and drug concentration.54,55 Because of these differences, a class effect of DCBs cannot be assumed.56

First-generation DCBs (e.g. DIOR-I®, Eurocor) were used in the early feasibility studies, but outcomes improved with newer-generation DCBs.57 The difference in efficacy has been attributed mainly to the absence of a matrix containing an elution excipient. The newer-generation DCBs (e.g. SeQuent Please®, B Braun) have a matrix consisting of an excipient to enhance lipophilicity, increase local tissue–drug transfer, and facilitate rapid absorption of the drug by the vascular wall. The balloon elution excipient is an important factor affecting the safety and efficacy of DCBs, as it determines the durability of drug dose, the downstream drug dose, the relative uptake by the vessel wall, and the drug retention.58 Different excipients are used in newer-generation DCBs; for example, the contrast agent iopromide is used in the SeQuent Please DCB (B Braun), and urea is used in the IN.PACT Falcon DCB (Medtronic).

The first trial to study the use of DCB in SVD was the single-arm Paclitaxel-Eluting PTCA-Balloon Catheter to Treat Small Vessel (PEPCAD-I) trial in 118 patients with SVD (mean diameter of 2.36 mm) using the SeQuent Please balloon.63 Approximately 30% of the patients required bailout BMS stenting and 18% had ISR at follow-up. Many single-arm registries have since reported favorable outcomes with DCBs in SVD.47,48,64–66

The first randomized trial to compare DCBs to stenting was the Paclitaxel-coated balloon versus drug-eluting stent during PCI of small coronary vessels (PICCOLETO) trial that included vessels with RVD <2.75 mm. It was stopped prematurely due to the superiority of the DES arm.67 However, this trial had many limitations: the DCB used was the first-generation DIOR-I DCB, hence tissue delivery of the drug was low; lesion preparation before use of DCBs was performed in <90% of cases; the rate of bailout BMS stenting was high (34%); and many bifurcation lesions were included (22.5%). Moreover, the DES used in the control arm was the first-generation paclitaxel-coated Taxus Liberté. In 2012, the Balloon Elution and Late Loss Optimization (BELLO) trial randomized 182 patients with SVD (mean diameter of 2.15 mm) to the IN.PACT Falcon DCB (90 patients) versus Taxus DES (92 patients). The study demonstrated comparable clinical outcomes at 6 months and up to 3 years.68,69

In 2016, Siontis et al. performed a large network meta-analysis of various PCI treatments for SVD.70 A total of 19 randomized clinical trials involving 5,072 patients were included, and the sirolimus-eluting stents were found to be the most effective treatment for reducing subsequent percentage diameter stenosis, followed by paclitaxel-eluting stents, then DCBs. However, both the PICCOLETO and BELLO studies were included, despite their many limitations, as discussed above. Also, none of the trials used second-generation DESs.

Observational studies were subsequently conducted, showing that DCBs were comparable to second-generation DESs in SVD, even in vessels with a diameter of 2 mm.71,72 The randomized non-inferiority Basel Kosten Effektivitäts Trial–Drug-Coated Balloons versus Drug-Eluting Stents in Small Vessel Interventions 2 (BASKET-SMALL 2) trial was the first and largest trial to compare the use of DCBs and second-generation DES.73 The study randomized 758 patients with SVD (RVD <3 mm) to PCI using the the SeQuent Please DCB or a DES (XIENCE V or Taxus Element). The first-generation Taxus was used in 24% of patients in the DES arm. During 12 months of follow-up, the incidence of MACE was 7.3% versus 7.5% in the DES and DCB arms, respectively (HR 0.97; 95% CI [0.58–1.64], p=0.9180). 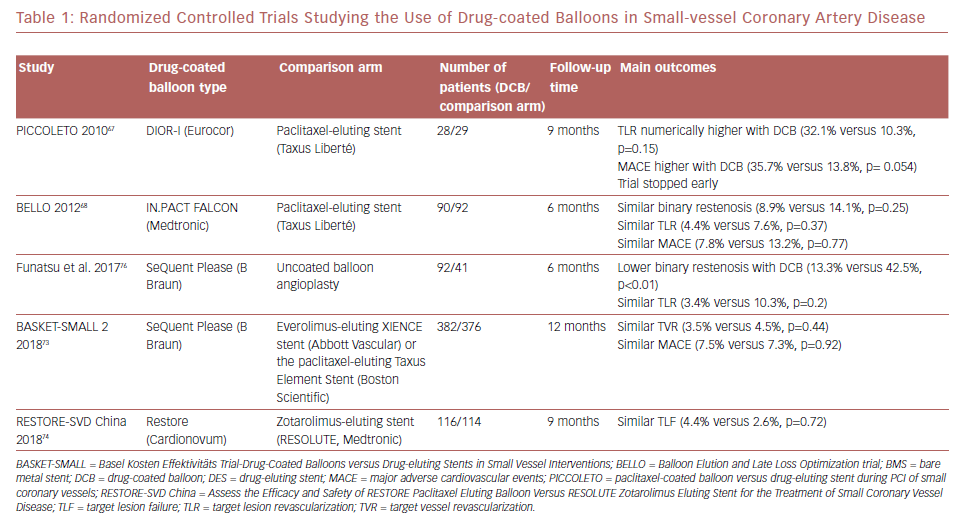 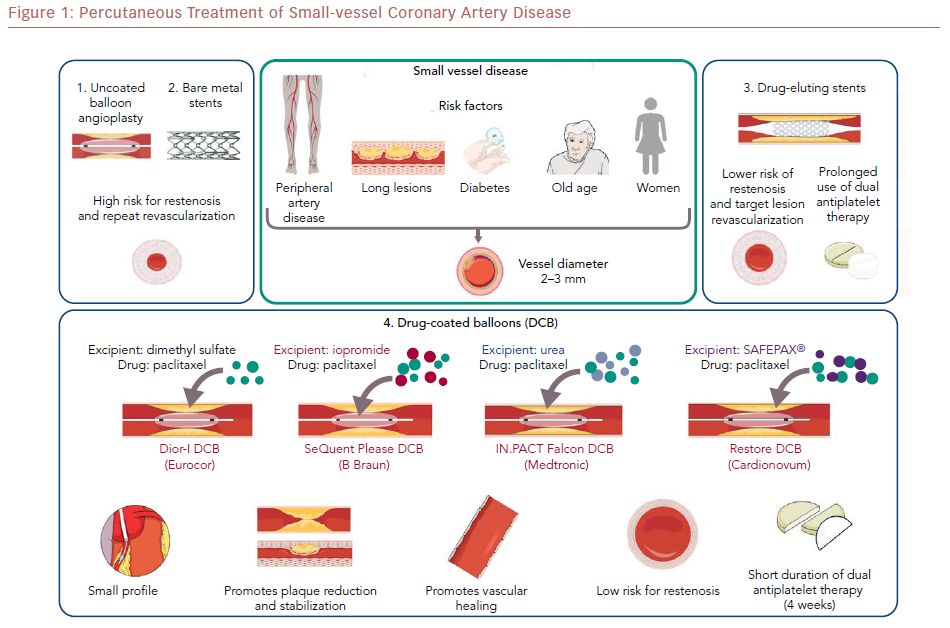 The recently published Assess the Efficacy and Safety of RESTORE Paclitaxel Eluting Balloon Versus RESOLUTE Zotarolimus-Eluting Stent for the Treatment of Small Coronary Vessel Disease (RESTORE SVD China) randomized, non-inferiority study compared the Restore® DCB (Cardionovum), a paclitaxel-coated balloon that uses the SAFEPAX matrix, based on an ammonium salt compound, and the RESOLUTE DES in SVD (RVD 2.25–2.75 mm).74 At 9 months, the Restore DCB was noninferior to the RESOLUTE DES for in-segment percent diameter stenosis in 230 patients. At 1 year, the Restore DCB and RESOLUTE DES had comparable incidence of TLF (4.4% versus 2.6%, p=0.72). A recently published meta-analysis of 1,824 patients demonstrated that DCBs had better outcomes than uncoated BA, and comparable angiographic and clinical outcomes with DES in SVD during a mean follow-up of 15 months.75

Most evidence on DCBs was derived from studies of paclitaxel-coated balloons. More recently, the use of sirolimus-coated balloons was reported to have favorable outcomes in 156 patients with SVD enrolled in the single-arm prospective NANOLUTÈ registry.52 At 12 months, the incidence of target lesion revascularization/target vessel revascularization was 2.8%, and the incidence of MACE was 3.8%. The randomized controlled trials studying the outcomes of DCB in SVD are summarized in Table 1.

In clinical practice, the treatment options for patients with SVD include medical therapy alone, BA, or stenting with a DES. Drug-coated balloons provide an alternative option for these difficult-to-treat lesions with outcomes that are comparable to DES in most studies. However, the 2018 European Society of Cardiology/European Association for Cardio-Thoracic Surgery guidelines on myocardial revascularization do not support the use of DCB angioplasty for de novo lesions because the published evidence is limited.56