The clinical course of heart failure is characterised by progressive worsening of cardiac function and symptoms. Patients progress to a condition where traditional treatment is no longer effective and advanced therapies, such as mechanical circulatory support, heart transplantation and/or palliative care, are needed. This condition is called advanced chronic heart failure. The Heart Failure Association first defined it in 2007 and this definition was updated in 2018. The updated version emphasises the role of comorbidities, including tachyarrhythmias, and the role of heart failure with preserved ejection fraction. Improvements in mechanical circulatory support technology and better disease management programmes are major advances and are radically changing the management of these patients.

Despite improvements in treatment, heart failure (HF) continues to have a progressive clinical course characterised by worsening of cardiac function and clinical condition, leading to a stage of advanced chronic HF. At this stage, the clinical picture is characterised by severe symptoms, frequent episodes of decompensation, poor quality of life and poor survival. Evidence-based medical treatments and devices are no longer effective in controlling symptoms and improving the clinical course and, in the case of neurohormonal antagonists, may not frequently be tolerated.

The Heart Failure Association (HFA) of the European Society of Cardiology (ESC) first used the term advanced chronic HF to define this condition in 2007.1 The definition was updated in 2018 to include additional clinical aspects, such as outpatient treatment of episodes of decompensation and the role of comorbidities, and an update of treatment, namely with the new mechanical circulatory support (MCS) devices.2

After the first HFA position statement had been issued, and because the New York Heart Association (NYHA) classification of HF into four classes was felt to be inadequate, the Interagency Registry for Mechanically Assisted Circulatory Support (INTERMACS) classification was developed.3 This classification divides patients into seven clinical profiles to better describe the severity of their condition. These criteria stratify people into different risk profiles, and are associated with different outcomes once a patient has received an MCS.4 However, the INTERMACS criteria were developed to have a registry to classify patients undergoing MCS in the US. The aim was to identify different levels of HF severity but only for patients receiving this treatment. Because of this, they do not cover patients’ clinical history but only the severity of their symptoms at the time of treatment.

In contrast, the HFA criteria were developed with the aim of identifying all patients with advanced chronic HF, independently of whether they could be treated with an MCS. The HFA classification included patients who may not have an indication for MCS, such as those with a preserved ejection fraction as well as those with significant comorbidities, such as severe renal and/or liver dysfunction. Such patients are commonly seen in clinical practice and the 2017 HFA position statement gives them due attention.

The 2007 and 2018 criteria of advanced chronic HF are outlined in Table 1. Like the HF definition in the ESC guidelines, they adopt the criterion of having both HF signs and symptoms and an objective evidence of cardiac dysfunction to define advanced chronic HF.5 In both the 2007 and the 2018 definitions, the signs and symptoms are those of severe NYHA class III or IV HF.

In respect to cardiac dysfunction, the 2007 statement included systolic dysfunction, shown by a left ventricular ejection fraction (LVEF) <30%, as well as LV diastolic dysfunction shown by echocardiographic abnormalities and/or signs of high intracardiac filling pressure by either invasive measurements or high brain natriuretic peptides (BNP) plasma levels.1 The 2018 statement adopts the same definition of systolic dysfunction (e.g. a LVEF <30%) and uses the 2016 ESC guidelines’ criteria for the definition of HF with preserved ejection fraction.2,5 In addition, it suggests isolated right ventricular (RV) failure, such as that resulting from arrhythmogenic right ventricular cardiomyopathy, or non-operable severe valve abnormalities and congenital abnormalities as possible causes of severe cardiac dysfunction.2 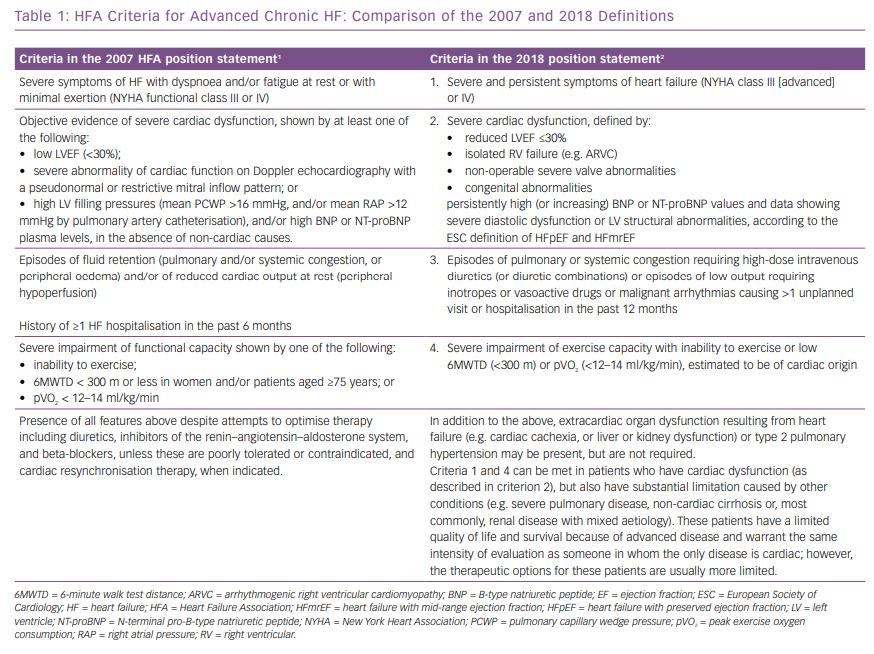 Both documents state the need to show severe limitation of exercise capacity, shown by a low <300 m, 6-minute walk test distance, or low peak oxygen consumption or inability to exercise. A poor clinical course, shown by episodes of HF decompensation in the past 6 or 12 months, is also required.1,2 Because many patients with an acute HF decompensation are now treated in an outpatient setting or in emergency departments with short-term loop diuretics or, less often, inotropic drugs infusion,6–9 unplanned hospital visits are included in the more recent statement.2 Similarly, emergency department visits or hospitalisations for malignant tachyarrhythmias are now included.2

Finally, comorbidities, including pulmonary disease and liver and kidney dysfunction, are now included as possible major determinants of a poor clinical course and prognosis for patients with advanced chronic HF.10,11 It is also considered that, in some cases, such comorbidities may dominate the clinical course of HF itself (Table 1).2 Both documents clearly state that they must be present despite optimal evidence-based treatment that now includes ivabradine, sacubitril/valsartan, cardiac resynchronisation therapy and implantable cardioverter defibrillator implantation, under the most recent guidelines.2,5

Risk stratification is crucial for HF management. Several prognostic risk scores and numerous single risk markers have been identified. However, studies are generally based on ambulatory patients or on those hospitalised for acute HF. Relatively little data specific to patients with advanced chronic HF is available.

Several clinical features predict a worse overall prognosis patients with HF and in those with advanced HF. Among them, older age, longer QRS duration, tachycardia (especially when in sinus rhythm), a longer history of HF symptoms, higher NYHA functional class, recurrent hospitalisations for HF, and signs of systemic or pulmonary congestion and/or reduced cardiac output (often shown by a lower blood pressure), are associated with an increased incidence of cardiovascular hospitalisations and deaths.

Among biochemical parameters, markers of end-stage organ dysfunction and injury (such as myocardial, renal and liver dysfunction), as well as markers of iron deficiency, electrolyte abnormalities (hyponatremia, hypo- or hyper-kalaemia and hypochloraemia) have all been associated with poorer outcomes. The prognostic role of hypochloraemia has been demonstrated in recent studies.12–14

Many parameters obtained by imaging, mainly by Doppler echocardiography and cardiac magnetic resonance imaging, have greater prognostic value than LVEF. These include LV dilatation and hypertrophy, mitral regurgitation, left atrial function, valve abnormalities, right ventricular function, pulmonary arterial pressure estimates and inferior vena cava diameter and dynamics. The accuracy of noninvasive measurements to estimate LV filling pressure is still controversial with the use of multiparametric approaches likely better than one single measurement such as the E/e’ ratio.15,16

Cardiopulmonary exercise testing (CPET) provides objective information about the exercise capacity of ambulatory patients with HF. It is indicated for the selection of candidates for heart transplantation. Peak exercise oxygen consumption (VO2), measured both as per cent of maximal predicted values and as an absolute value, as well as minute ventilation/carbon dioxide production (VE/VCO2) and an oscillatory pattern of ventilation during exercise have all been shown to have independent prognostic value.17 Based on prognostic studies, heart transplantation is indicated when peak VO2 is ≤14 ml/kg/min or ≤12 ml/kg/min in patients on beta-blockers. Achievement of a respiratory exchange rate >1.05 is important to define achievement of maximal aerobic capacity. Ventilatory response to exercise provides an objective assessment of exercise capacity, independently of patients’ motivation and, along with the presence of an oscillatory pattern of ventilation, may further stratify the patients.17 A low 6-minute walking test distance (6MWTD) may also be used in prognostic assessment.

The HFSS was developed for the selection of candidates for heart transplantation among ambulatory patients with severe HF. Fully noninvasive models, including CPET, can be as accurate at predicting prognosis as those including invasive measurements.19 The SHFM has been fully validated. It has shown an adequate discrimination power though underestimated the absolute risk in patients with advanced HF, namely in those indicated for MCS.22 Its predictive value has also been shown in patients on MCS so it may be used to estimate outcomes compared with no intervention.23 MAGGIC, which is based on individual data of 39,372 patients with heart failure with reduced ejection fraction and preserved ejection fraction from 30 cohort studies and six clinical trials, is among the most comprehensive and consistent.2 and VE/VCO2 slope, haemoglobin, serum sodium and renal function. It compares favourably with HFSS and SHFM, although the latter does not require CPET data.24

A comparative study showed a similar predictive accuracy of the four scores with a tendency to underestimate event rates with the SHFM and HFSS scores and a tendency to overestimate them with MAGGIC and MECKI scores.25

By definition, traditional treatment with drugs and devices is not effective in relieving symptoms and improving the clinical course of the patients with advanced HF. Resistance to loop diuretics remains a major hallmark of advanced HF and strategies to overcome it are of utmost value. Intravenous ultrafiltration, especially with new, simpler devices, might become a valid alternative to diuretic treatment.26 Alternatives to IV furosemide administration, such as subcutaneous furosemide, IV and oral torasemide, or a combination of acetazolamide or thiazides or metolazone, may show favourable results in future trials.27–31 Renal replacement therapy, for example, peritoneal dialysis, may also become necessary.5 Inotropic drugs are still an option as a palliative treatment. However, intermittent levosimendan administration has been associated with favourable effects on natriuretic peptides, quality of life and possibly hospitalisations.9

The use of short- or long-term MCS is warranted in patients with advanced HF when it is caused by LV systolic dysfunction and in the absence of major contraindications, such as comorbidities or severe right ventricular dysfunction.5,32,33 Better safety and survival of patients with permanent LV assist devices is widening their indication. Recent trial data support their indication also for people who have severe functional limitation although they are ambulatory and not dependent on inotropes.34

Nonetheless, determining the best therapeutic strategy for individual patients with advanced HF remains challenging, and the use of MCS carries a high risk of adverse events, including device failure, infections, thromboembolic and haemorrhagic events.35–37

Heart transplantation remains the best option for most patients with advanced HF, including those with right ventricular dysfunction. The number of transplants seems, however, to have reached a plateau in recent years, because the number of donor hearts are limited. It may be hoped that improvements in MCS technology may allow for a greater use of these devices for the treatment of advanced HF.

In the case of indications for both MCS and of heart transplantation, appropriate organisation and communication between different advanced HF centres is mandatory. Patient selection and treatment should be performed using hub and spoke models, as outlined in the recent advanced HF position statement.1 Palliative care remains an important option to be indicated not only when treatment has failed but also as concomitant treatment in patients with severe disease.2,38

Advanced chronic HF is the condition where HF has progressed to a stage where traditional, evidence-based, treatment has become ineffective and the patients have severe symptoms, frequent episodes of decompensation and poor survival. It is important to increase awareness of this condition, as new treatments are now available. They include palliative therapy, disease management programmes and MCS devices. The use of such treatments may improve quality of life and, at least in some cases, outcomes too.