Chronic inflammation plays a significant role in lifestyle-related diseases, such as cardiovascular diseases and obesity/impaired glucose tolerance. Curcumin is a natural extract that possesses numerous physiological properties, as indicated by its anti-inflammatory action. The mechanisms underlying these effects include the inhibition of nuclear factor-kappaB and Toll-like receptor 4-dependent signalling pathways and the activation of a peroxisome proliferator-activated receptor-gamma pathway. However, the bioavailability of curcumin is very low in humans. To resolve this issue, several drug delivery systems have been developed and a number of clinical trials have reported beneficial effects of curcumin in the management of inflammation-related diseases. It is expected that evidence regarding the clinical application of curcumin in lifestyle-related diseases associated with chronic inflammation will accumulate over time.

Inflammation involves an array of processes in response to tissue damage resulting from oxidative stress or other causes and triggers repair, such as subsequent extracellular matrix remodelling and fibrosis.1–3 Chronic inflammation continues for a prolonged period, lasting from several months to several years, and is characterised by tissue invasion by inflammatory macrophages. This induces the expression of inflammatory cytokines or growth factors, which is associated with the pathophysiology of various lifestyle-related diseases including cardiovascular disease, obesity, diabetes, chronic obstructive pulmonary disease (COPD) and other related diseases, such as dementia.4–6 Atherosclerosis is a chronic illness associated with inflammation and is a major cause of cardiovascular disease.7–10

The US Food and Drug Administration has approved curcumin as a compound that is “generally recognised as safe” and a clinical trial reported that it was well tolerated and safe at doses as high as 4,000–8,000 mg/kg per day.11 Trials in humans have reported beneficial effects of curcumin and it appears to have a role in treating lifestyle-related diseases associated with inflammation.

Risk factors for atherosclerosis, including hypertension, diabetes and smoking, cause a chronic inflammatory response. Oxidative stress can cause atherosclerotic plaques to become unstable and rupture, possibly triggering thrombosis. Statins are drugs with anti-inflammatory effects that are used for treating high cholesterol and various studies have demonstrated their effectiveness in the primary and secondary prevention of cardiovascular events.16 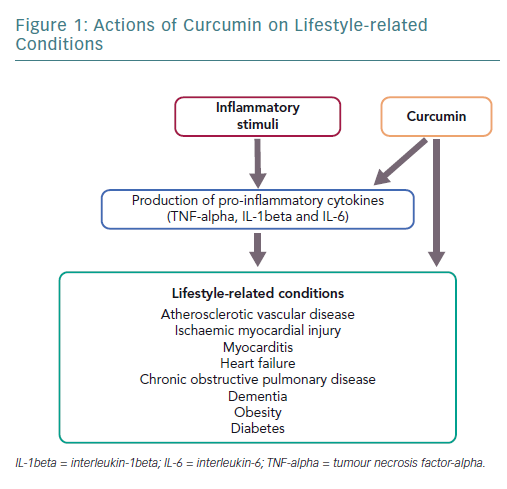 The death of myocytes due to MI temporarily causes an intense inflammatory response via the activation of Toll-like receptors.21 In a rodent model of MI, considerably increased expression of inflammatory cytokines, such as TNF-alpha, IL-1beta and IL-6, was evident after a few hours in some cases (several hours to 1 day).22 In addition, the generation of reactive oxygen species due to ischaemia is essential in activating inflammatory responses.21

Several studies suggest that curcumin has an inhibitory effect on NF-kappaB, which is a pivotal mediator of inflammatory responses. Lv et al. assessed a rat model of MI in which they ligated the left anterior descending artery. They found that administering 150 mg/kg curcumin on the day after ligation significantly inhibited an increase in NF-kappaB expression as a result of MI and increased the PPAR-gamma expression, which is involved in anti-inflammatory signalling, consequently reducing the infarct size.23 In a rabbit model of myocardial ischaemia–reperfusion injury during cardiopulmonary bypass, Saeidinia et al. reported that curcumin inhibited NF-kappaB activation in the nucleus of cardiomyocytes, thus reducing TNF-alpha, IL-6 and IL-8 levels in the blood, and that it inhibited monocyte apoptosis.24 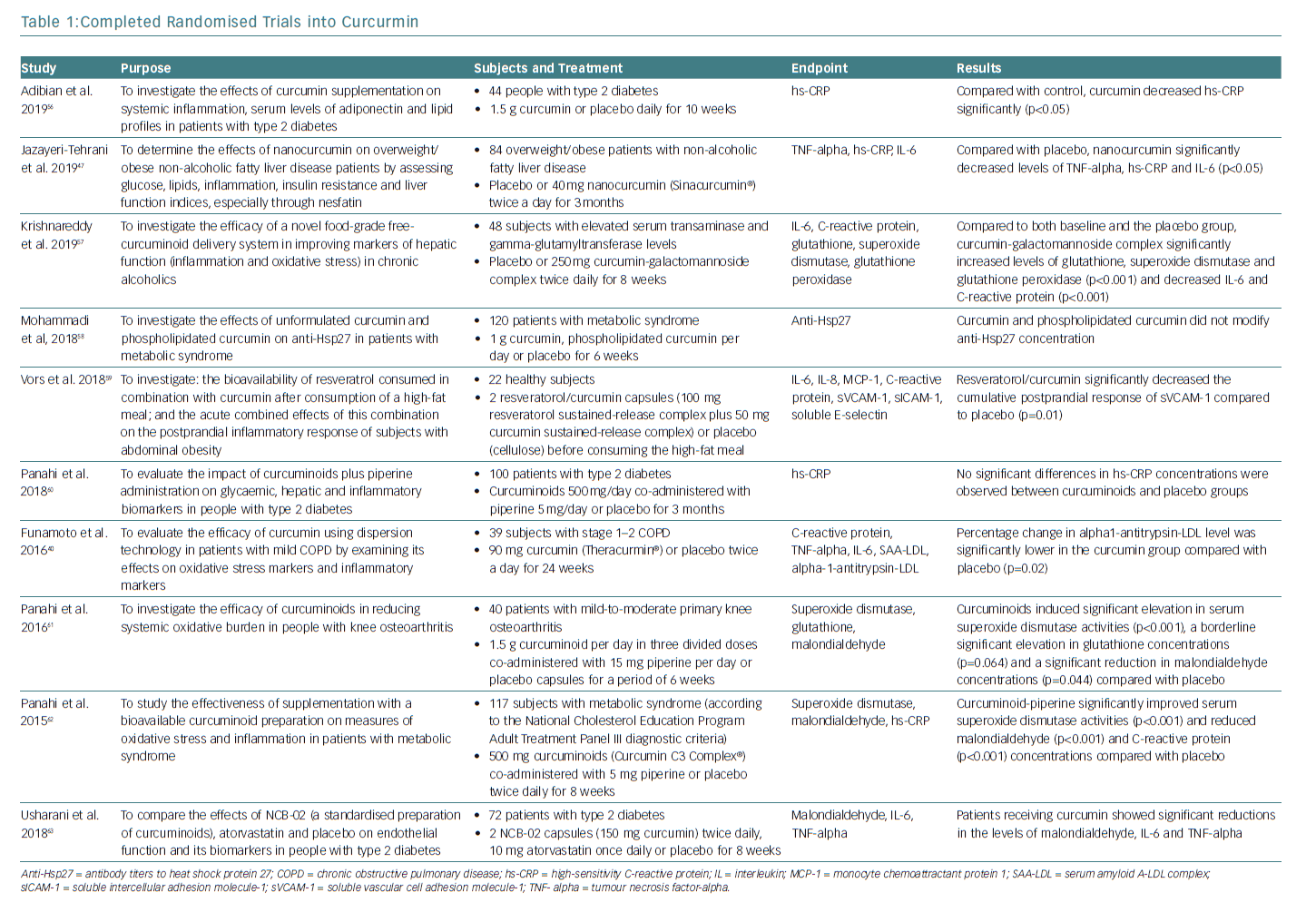 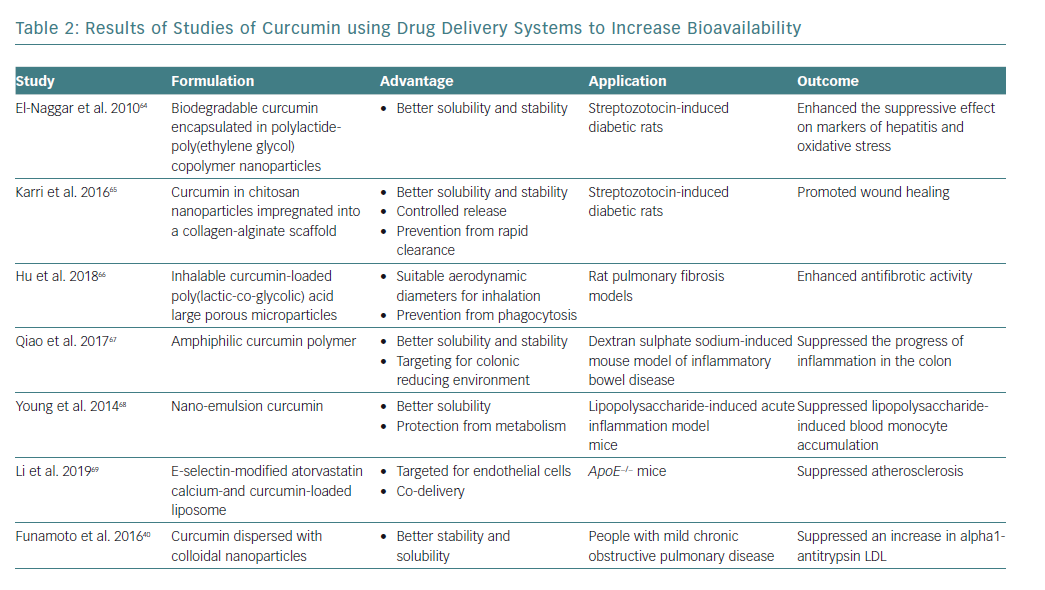 Early growth response 1 plays a key role in the pathophysiology of acute and chronic cardiovascular disease and is associated with induction of TNF-alpha and IL-6 expression. Wang et al. studied a rat model of myocardial ischaemia–reperfusion injury and found that previous administration of curcumin inhibited early growth response 1 expression and reduced the infarct size.25

Curcumin and Myocarditis and Heart Failure

COPD is a family of diseases mainly characterised by airflow obstruction due to airway inflammation and remodelling. Several clinical studies have demonstrated the relationship between COPD and an increase in inflammatory markers, such as TNF-alpha, IL-6 and CRP.35,36 Smoking is the primary cause of COPD, and can cause systemic inflammation, but this is further exacerbated in people with COPD.35,36 COPD causes various complications, including MI, stroke and lung cancer. The most common comorbidity in patients with mild-to-moderate COPD is cardiovascular disease. One study suggested that chronic inflammation due to COPD exacerbates atherosclerosis, both directly and indirectly, and promotes thrombosis by weakening plaque.37

Several studies have demonstrated the possible benefits of curcumin in COPD. Moghaddam et al. used a mouse model of K-ras-induced lung cancer in which Haemophilus influenzae induced COPD-like airway inflammation and showed that curcumin inhibited neutrophil migration to the lungs.38 Yuan et al. studied a mouse model of COPD induced by lipopolysaccharide and cigarette smoke, reporting that curcumin inhibited the degradation of IkappaB-alpha protein and the expression of cyclooxygenase-2, thus reducing airway inflammation and remodelling.39 Funamoto et al. conducted a clinical trial including patients with mild COPD in which the oxidised LDL – alpha-1-antitrypsin LDL – was significantly decreased in those taking highly absorbable curcumin compared with those taking a placebo.40

Adipose tissue is a multifunctional endocrine organ that releases various inflammatory and anti-inflammatory cytokines and physiologically active peptides.41,42 Obesity is a risk factor for cardiovascular disease.41,43 The accumulation of pericardial fat and myocardial steatosis is associated with the progression of coronary artery atherosclerosis. In obese patients, the secretion of inflammatory adipocytokines, such as TNF-alpha and IL-6, is increased and the secretion of anti-inflammatory adipocytokines is inhibited in enlarged mast cells in the visceral adipose tissue.42,43

Several rodent studies have assessed the effects of curcumin in models of obesity. In a mouse model of obesity due to a high-fat diet and in a model of genetic obesity, curcumin reduced macrophage invasion of adipose tissue, increased adiponectin production (which has anti-inflammatory and anti-atherosclerotic actions) and inhibited adipose tissue inflammation.44

In people with type 2 diabetes, trials have shown that curcumin decreased leptin and increased adiponectin in the blood and resulted in improved lipid metabolism.48,49

Over the past few years, the role of inflammation has been recognised in the onset and progression of dementia.50,51 One study reported that dementia onset may be related to conditions such as hypertension, dyslipidaemia and diabetes, independent of cardiovascular risk factors.52

The onset of Alzheimer’s-type dementia is closely correlated with inflammation and oxidative stress in the brain.50,53 NF-kappaB activation in the glial cells of Alzheimer’s patients induces increased expression of inflammatory cytokines and contributes to neuronal degeneration in the brain.53 Levels of CRP, IL-6 and alpha1-antichymotrypsin in the blood are significantly correlated with the degree of dementia.50

Research into the possible impact of curcumin on dementia is currently very limited. However, Liu et al. found that curcumin significantly reduced spatial memory deficit and promoted the function of cholinergic neurons in mice; this improvement was associated with the inhibition of NF-kappaB signalling pathways and enhanced transcription by PPAR-gamma.54 Small et al. reported that highly absorbable curcumin reduced amyloid and tau accumulation in the brains of adults with no cognitive impairment and may consequently improve memory and attention.55

Trials on Anti-inflammatory Effects of Curcumin

The anti-inflammatory effect of curcumin forms the basis for its potential clinical applications (Figure 2). A large body of clinical evidence is expected to accumulate in the future. Among trials registered at Clinicaltrials.gov, 162 studies are related to the anti-inflammatory effect of curcumin. Of these, 50 are currently on-going, 70 are complete and 42 have been withdrawn, have unknown status or have been terminated. Of the 50 completed studies, the 10 randomised double-blind and placebo-controlled comparative studies are listed in Table 1. The results of eight of these studies were significant. As the absorption of curcumin is very poor, most studies that reported significant effects used a large dose of curcumin (>1.5 g/day) or employed strategies to increase its absorption, such as using a drug delivery system.

Curcumin has beneficial effects on the status of various diseases involving chronic inflammation. However, the absorption of curcumin is poor, and even if absorbed into the body it is rapidly metabolised and excreted in faeces.14 To overcome its low bioavailability, various drug delivery systems have been developed (Table 2). These include polymer nanoparticles, chitosan nanoparticles, colloidal nanoparticles, nanoemulsion and ligand-targeted liposomes.

Moreover, Funamoto et al. reported that curcumin dispersed with colloidal nanoparticles (Theracurmin®) suppressed an increase in alpha1-antitrypsin LDL levels in people with mild COPD.40 The improvement in the bioavailability of curcumin through the development of drug delivery systems may contribute to the successful clinical application of curcumin. 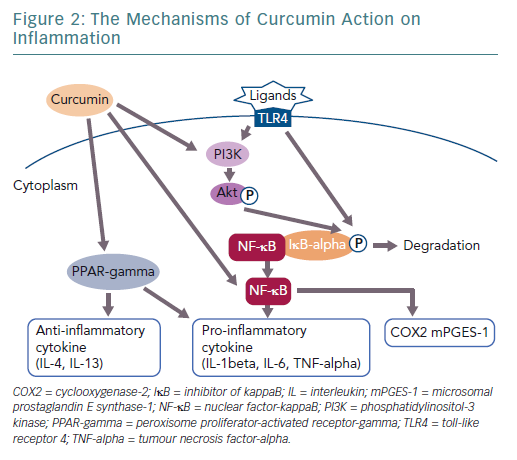 A number of studies have reported the efficacy of curcurmin and the mechanisms by which its anti-inflammatory activity could treat various lifestyle-related conditions associated with chronic inflammation, including atherosclerosis, heart failure, obesity, diabetes and other related diseases, such as dementia. Most of these studies have involved animal experiments; however, there are several reports on the benefits of curcumin use in humans. Because curcumin has extremely low bioavailability in humans, an appropriate drug delivery system is necessary for its clinical application.

It is important to study the relationship between the structure and activity of curcumin and to develop novel compounds that are more effective than natural curcumin. Additional clinical trials involving drug delivery systems for curcumin in humans need to be conducted to determine the benefits of curcumin treatment in conditions associated with inflammation.