Chemotherapy treatment of malignancy accounts for 1–2% of takotsubo syndrome (TS) triggers. Women comprise 60–70% of patients with chemotherapy-associated TS, a distinctly lower prevalence than the 90% female prevalence in TS overall. Fluorouracil is the most commonly reported TS-triggering chemotherapeutic agent, although this must be interpreted in the context of the frequency of worldwide use of this agent. The onset of TS relative to chemotherapy initiation is quite variable, ranging from the initial administration to subsequent chemotherapy cycles several weeks beyond initiation. Limited information suggests chemotherapy can be safely reinitiated once the patient has recovered from the initial TS event. Having a TS event in the setting of chemotherapy treatment for malignancy is associated with substantial mortality.

During the past 25 years, takotsubo syndrome (TS) has emerged as an important form of acute myocardial injury characterized by a distinctive regional left ventricular (LV) contraction abnormality, often with marked reduction of the LV ejection fraction, and typically completely reversible. At presentation, TS is often indistinguishable from acute coronary syndrome, yet its occurrence is independent of epicardial coronary artery obstruction.1–4 Other features include a predilection for older women and an association with antecedent stressful event acting as the TS trigger. During the early experience with this condition, these triggering events were largely related to emotional trauma.5–10 As experience has expanded, a greater association with physical stressors has emerged.3,4,11–13 The increased association with a physical trigger likely reflects greater awareness of secondary TS complicating acute illness. Within the realm of physical triggers, a number of reports have documented pharmacological agents as TS triggers, including cocaine, nortriptyline, venlafaxine, albuterol, flecainide, epinephrine, duloxetine, and a number of chemotherapeutic agents.14 In this article, we examine the association of chemotherapeutic agents with TS.

Surprisingly little information is available regarding the association of chemotherapy with TS triggering. The most commonly used chemotherapeutic agents for malignancy among Medicare recipients in the US are listed in Table 1. A 2015 international systematic review of 1,109 TS patients reported malignancy as a comorbid condition in 10%, although malignancy itself was not necessarily the TS trigger and no information was provided regarding chemotherapy use.15 A 2010–2014 analysis of 1,067,977 adult chemotherapy-related admissions from the US National Inpatient Sample database noted 562 patients (average age 63 ± 12 years, 69% female) with a TS diagnosis, representing an incidence of 37.0 (female) and 16.6 (male) per 100,000 chemotherapy-related hospitalizations.16 The annual incidence of chemotherapy-associated TS is increasing by an estimated 8.6 per 100,000 patients.16

The International Takotsubo Registry (1,750 patients) noted malignancy in only 1.3% of 630 patients (8 individuals) with physical TS triggers, although details regarding use of chemotherapy were not provided.12 Therefore, examining the association of chemotherapy with TS is limited by the relatively small number of patients and the lack of detail surrounding these events.

A computer-assisted search of the electronic database MEDLINE (1996–January 2019) was conducted. References were also examined for relevant articles, including review papers. The main search terms were: “takotsubo cardiomyopathy”, “takotsubo syndrome”, “chemotherapy”, “stress cardiomyopathy”, “apical ballooning syndrome”, and “cancer”. Published case reports of TS and chemotherapy were chosen. We excluded studies in which cancer itself (not chemotherapy) was reported as the primary physical stressor. 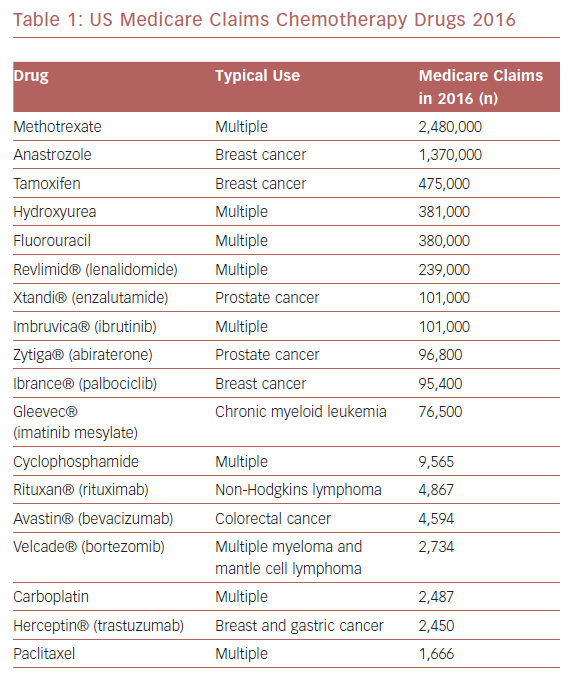 From 2007 to 2018, we identified 36 unique patients with chemotherapy-associated TS (female patients 19 [61%], average age 64 ± 13 years, range 24–85 years; Table 2). ST-elevation was the most frequent initial ECG finding, present in 56% of reports providing this detail, and the average initial ejection fraction was 28 ± 12%. The onset of TS relative to initiation of chemotherapy was highly variable, ranging from the initial administration to subsequent chemotherapy cycles several weeks beyond initiation. In some cases, the temporal delay between chemotherapy administration and TS onset was lengthy, raising the question of whether the chemotherapeutic agent was actually the TS trigger.

The antimetabolite class of drugs (5-fluorouracil, capecitabine and cytarabine) represented the agents most commonly reported as TS triggers (Table 2). A variety of other chemotherapeutic classes were also represented, including tyrosine kinase inhibitors (sunitinib, axitinib, and pazopanib), HER2 monoclonal antibodies (trastuzumab and pertuzamab), angiogenesis inhibitors (bevacizumab), CD20 monoclonal antibodies (rituximab), microtubule-targeting drugs (paclitaxel and combretastatin), and anthracyclines (doxorubicin and daunorubicin). The TS event was associated with the use of a single chemotherapeutic agent in 69% of patients. Among patients with chemotherapy-associated TS, the most frequent malignancies were colorectal (n=10, 28%), leukemia (n=4, 11%), lymphoma (n=3, 8%), and renal (n=3, 8%).

Chemotherapeutic agents have a long-established reputation for cardiotoxicity, including left ventricular dysfunction and heart failure, acute myocardial ischemia and infarction, thromboembolism, hypertension, and arrhythmia.47 Several of these drugs (e.g., fluorouracil, capecitabine, paclitaxel, docetaxel, bevacizumab, erlotinib, and sorafenib) have been associated with an acute MI-like syndrome that may be difficult to distinguish from a TS event.

Recently, immune checkpoint inhibitors have been associated with acute myocarditis characterized by onset of new cardiovascular symptoms, troponin elevation, and abnormal ECG, typically within days to weeks of treatment initiation.48 Acute myocarditis and TS share clinical features, including presentation, ischemic ECG changes, troponin release, and absent acute coronary artery obstruction. In rare circumstances, acute myocarditis may result in a TS-like regional LV contraction abnormality, in which case it may be challenging to distinguish the two conditions.49 In this setting, cardiac MRI may be useful because TS is characterized by myocardial edema in a transmural distribution (T2-weighted imaging) without late gadolinium enhancement.50,51

The apical LV ballooning phenotype is not pathognomonic of TS and urgent coronary angiography is necessary to exclude an unstable coronary obstruction that would require revascularization.3,4 In particular, TS-like apical ballooning may be the consequence of acute myocardial ischemia in the setting of proximal stenosis involving the left anterior descending (LAD) coronary artery, which extends beyond the LV apex to supply the inferior wall (‘wrap around’ LAD).52 In uncertain situations, such as late presentation, suspected coronary embolism, or when coronary angiographic findings are equivocal, CMR is useful because late gadolinium enhancement is rarely evident in TS, but frequently present in a vascular distribution in patients with ischemic injury from coronary artery obstruction.3,4,53

In the largest study to date, all-cause in-hospital mortality was substantially greater among chemotherapy-treated patients with versus without a TS event (18.3% versus 3.2% respectively; p<0.001).16 Advanced age (>85 years), sepsis, fluid–electrolyte disorders, respiratory failure, and cardiogenic shock were univariate predictors of in-hospital mortality in patients with chemotherapy-associated TS. Metastatic cancer was present in only 17%.16 There is limited information regarding the safety of continuing or reinitiating chemotherapy after a TS event. A study involving a small number of patients (n=30) noted the majority of patients were able to resume chemotherapy cancer treatment after normalization of LV ejection fraction (generally within 3 weeks of the TS event), without TS recurrence.54

The current body of information regarding chemotherapy-triggered TS reveals a patient profile that differs from that of the larger TS experience. In particular, women account for only 60–70% of patients with chemotherapy-associated TS, yet comprise > 90% of all TS cases,3 an anomaly without an obvious explanation. In women, the five most common malignancies are breast, lung, colorectal, uterine, and thyroid, versus prostate, lung, colorectal, bladder, and melanoma in men.55 Although publication bias may explain some of these findings, it is possible that men have a particular TS vulnerability in the setting of malignancy and chemotherapy. In fact, physical TS triggers are more common in men, and men have a higher 1-year TS-related mortality than women.56

The frequency of reports noting 5-fluorouracil as a TS trigger is curious. This drug is on the WHO’s list of essential medicines for cancer; therefore, fluorouracil likely represents one of the most commonly used chemotherapy agents worldwide.57 Consequently, the frequency of fluorouracil-associated TS may be driven by exposure of a greater number of patients to this agent (Table 1). Alternatively, fluorouracil may have pharmacological properties that can trigger a TS event. For example, there is evidence that fluorouracil is an arterial vasoconstrictor,40 and coronary microvascular vasoconstriction is proposed as a mechanism in TS pathophysiology.58

Chemotherapy treatment of malignancy is a relatively uncommon TS trigger, with a significantly greater proportion of men than is typically observed with TS. Fluorouracil is the most commonly reported chemotherapeutic agent, although this must be interpreted in the context of the frequency of worldwide use of this agent.

Whether certain chemotherapeutic agents are more likely to trigger TS is unresolved. Based on limited information, chemotherapy can be safely reinitiated, with careful observation, once the patient has recovered from the initial TS event. A TS event in the setting of chemotherapy treatment of malignancy is associated with substantial mortality.

To view table 2, please download the PDF of this article.